Hamilton: Onto the next one Valtteri, let´s keep pushing bro 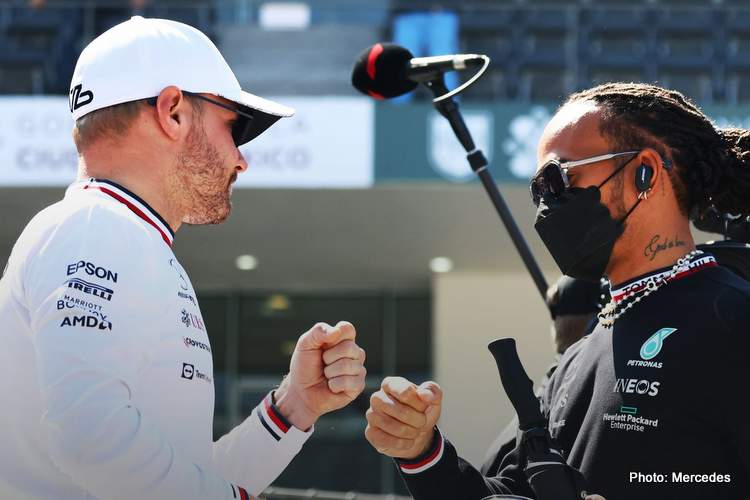 Lewis Hamilton has moved to defuse comments he made about his Mercedes teammate Valtteri Bottas and Red Bull’s Sergio Perez after the Mexico City Grand Prix on Sunday.

The Briton, who trails Red Bull rival and Mexico race winner Max Verstappen by 19 points with four races remaining, took to Instagram to clarify his words.

“Yesterday I said that VB left the door open and naturally people will jump to criticise,” he said in relation to his observation that Bottas, on pole, left room for Verstappen to seize the lead into the first corner.

“We are a team and we win and we lose as a team. There is not one single person responsible for winning or losing, we do it together good or bad. You may be able to beat us but you can’t break us.

“Onto the next one Valtteri, let’s keep pushing bro,” added the seven-time F1 World Champion.

Lewis: I have a lot of respect for Perez

After the race in front of a highly charged 150,000 crowd, Hamilton also told reporters that he knew the Red Bull was quick because Perez had got close up behind him.

The Mercedes driver said a day after the race at Autodromo Hermanos Rodriguez: “I want to make sure people don’t read what I was saying wrong.”

“I have a lot of respect for (Perez) and think he’s doing a great job in his new team. He’s improved so much this season and I know how hard it is to progress with a new team, it takes time.

“My comment was simply that following another car in Mexico is the hardest thing due to the low drag we all have. That’s why there is very little overtaking.

“However, he was able to follow so closely which highlights just how much more downforce they were able to carry,” explained Hamilton.

Perez finished the race in third place, with Hamilton second. The result saw him the Merc man drop points to Verstappen, and now he trails by 19 with four rounds to go. (Reporting by Alan Baldwin)

“You may be able to beat us, but you can’t break us.” pic.twitter.com/4UUq97sscs