Vettel: I was on my own for most of the race 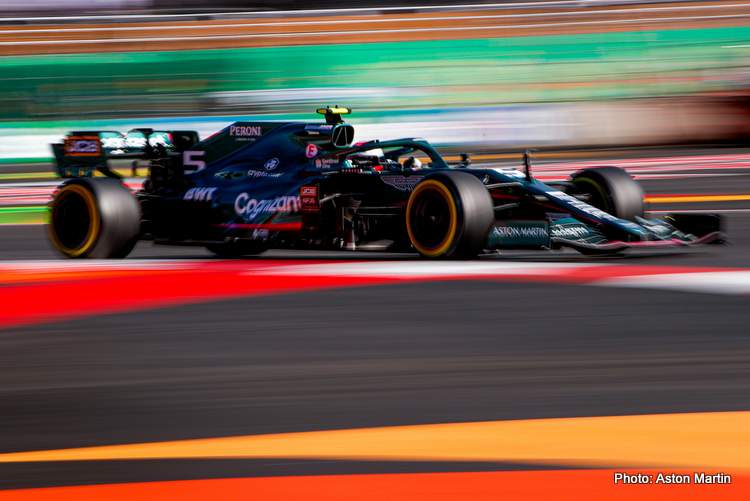 After a barren run of four pointless races, Sebastian Vettel has now scored points in two races in a row, with a solid performance in the 2021 Mexico City GP, where he admitted he was on his own for most of the race.

Vettel’s first season with Aston Martin so far has been a vacillating affair, with highs such as his Baku podium, and the Hungary second place lost to a fuel irregularity in his car. But there were also ten races where he failed to score points for various reasons.

However, the German scored a point in Austin from 18th on the grid due to a power unit-related grid penalty, and then followed it by a decent seventh place in Mexico netting him six Formula 1 Championship points.

That made Vettel “reasonably happy” as he told F1’s official website post race in the media pen, after racing at a track he “quite liked” but described as “very slippery”.

A good day at the office

Vettel reflected on his race during his Aston Martin’s post-race press release.

“I am quite happy with our performance today,” he revealed. “We had shown competitive long-run pace on Friday and I knew that if we could hold position on lap one, we would be able to stay there and score points.”

The four-time Champion then explained: “We obviously benefited from the spin for Valtteri [Bottas], although it actually held me up a bit, and the damage to Daniel’s [Ricciardo] car, but we managed to recover a position from [Antonio] Giovinazzi using the strategy.

“After that, I was on my own for most of the race with decent pace. It was a solid weekend by the team and I am pleased we could score some good points,” the winner of 53 grands prix revealed.

Aston Martin CEO & Team Principal, Otmar Szafnauer was happy with Vettel’s race and said in the team’s media brief: “Sebastian delivered a solid drive, with strong race pace, which allowed him to control his afternoon and score six points thanks to a fine seventh place.

One to forget for the other Aston Martin driver

Lance Stroll had a horrid weekend, crashing out of qualifying in Q1, where the team would’ve hoped he could help his teammate with a tow, maybe giving him a tug into Q3, as he was always going to be starting from the back of the grid, courtesy of a power unit-related grid penalty.

And it wasn’t the smoothest of races for the Canadian as he finished only 14th, with an off-track excursion at one point of the race, despite claiming that his car felt good.

“We did what we could from the back, but it was tricky today,” Stroll said. “It is difficult to race from last place here because it is not easy to follow and overtake.

“The car felt good, but we were on the back foot from the start. We were hoping things would happen in front of us to help us gain places, but we needed more to go our way.

“The highlight of my race was the move on George [Russell] late on, but there was not much more we could do today. Now we focus on Brazil and aim to fight for points there,” Stroll concluded.

Szafnauer however, thinks his Boss’ son has done okay considering the grid penalty. He said: “Starting at the back of the grid as a result of grid penalties triggered by power unit component changes, Lance drove a good race to 14th, the highlight of which was a beautiful overtake of [George] Russell’s Williams around the outside of Turn One.

“From here we go straight to Interlagos, a superb racetrack that will be great to race on again after missing it last year owing to the pandemic,” the Aston Martin boss concluded.

Aston Martin have been hurt by this year’s aero regulations that revised the rules for F1 Cars’ floors, as they adopt the same low-rake concept as Mercedes, whose W11 car of last year was the “inspiration” behind the team’s 2020 car, the RP20, when they were still called Racing Point.

While Mercedes recovered from the new aero rules, Aston Martin haven’t and as a result are  a distant seventh in the Constructors’ table behind AlphaTauri. (Follow me on Twitter @MallakJad)