Gasly: We couldn’t ask for a better weekend 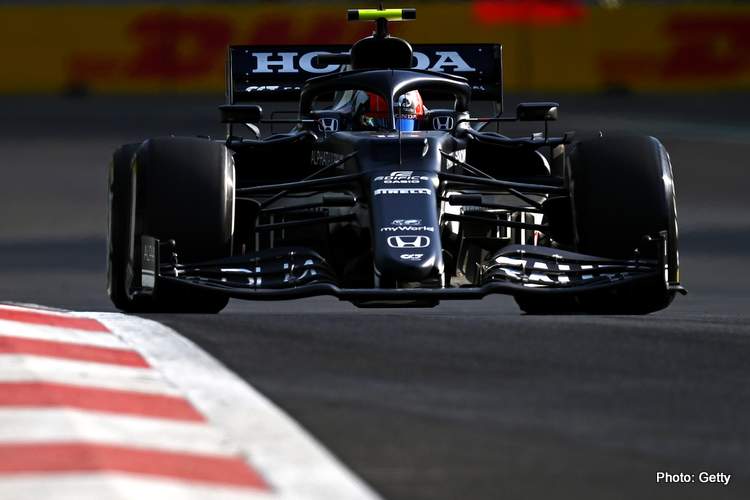 While this year’s title contenders steal the show, a driver like Pierre Gasly, goes about his business understatedly, delivering the goods like his fourth place in Mexico, as he couldn’t ask for a better weekend.

Gasly has been the dark horse of the 2021 Formula 1 season so far, punching way over his weight and delivering some impressive performances to beat top midfield teams in a car that isn’t supposed to be the at the midfield forefront.

His performance at the 2021 Mexico City Grand Prix was another example of the Frenchman’s low-profile excellence, keeping the Ferraris of Carlos Sainz and Charles Leclerc at bay to take an excellent fourth.

“I’m extremely happy, P4 is such a great result and we couldn’t ask for a better weekend,” Gasly said in AlphaTauri’s press release.

“Everything was under control with Charles behind, I was able to pull away nicely and manage the entire race well from fourth position,” he revealed.

“This weekend the car has really been there, we delivered yesterday in Quali and then again in the race today and finishing ahead of Ferrari always feels good as well.

“We’re equal on points with Alpine now, it’s my personal plan to deliver fifth in the Championship to Franz and the whole team – a nice and well deserved Christmas gift – so we’ll keep pushing for that,” the 25-year-old vowed.

“The way we’re currently working as a team I think we’ll be able to find our chances in the next few races,” the winner of the 2020 Italian Grand Prix confidently concluded.

AlphaTauri team boss Franz Tost reflected on the weekend in Mexico, that saw their senior team Red Bull take a win and a third.

“Big congratulations to Max, this victory means a big step towards the possibility of winning the Championship,” he said.

“It’s been wonderful coming back here to Mexico. There are so many Formula 1 fans and it’s really exciting to see all the grandstands full of passionate people.

“It’s been very interesting to see Checo, especially in the last laps, fighting while chasing Hamilton.”

Tost was delighted with his Gasly’s result, and the way he managed his weekend, capitalizing on the opportunities that presented themselves.

“From our side, I must say that we had a very successful weekend,” the Austrian insisted. “Pierre qualified yesterday in fifth position and the strategy was clear today: he had to survive in the first corner, keep the Ferraris behind and bring home P5.

“Due to Bottas’ spin on the first lap, he was able to move up to fourth place and he defended this up to the chequered flag.”

Tost hailed Gasly’s race craft and said: “We know how difficult it is here in Mexico to manage the tyres and the brakes at this altitude, and Pierre was incredible during the entire race, behaving in a very professional way.

“Pierre and the team did a fantastic job across the whole weekend and the car showed a very good performance,” the 65-year-old summed up.

It was a case of mixed fortunes for the Faenza-based team, a the other driver, Yuki Tsunoda crashed out of the race during the first corner mayhem. Tost commented on his rookie’s race.

“Yuki was a bit unfortunate today,” he said. “He had to start from P17 because of the Power Unit change and then in the first corner Ocon crashed into him, so he couldn’t continue the race as the car was damaged too heavily.

“He showed great pace across the weekend and I’m looking forward to seeing how he performs now for the rest of the season.

“We hope we will not have any more penalties to take, meaning he should be in the top 10 and regularly scoring points in the remaining races,” Tost hoped.

“We will now get ready for Sao Paulo where I hope we can show a similar performance. We will have the Sprint Qualifying but having a fast car should definitely help,” the team boss concluded.

Tsunoda lamented a bad weekend, where he messed up his qualifying in his final Q3 lap, and being the subject of Red Bull’s rage as he was deemed responsible for ruining Max Verstappen’s and Sergio Perez’s qualifying efforts, handing the front row over to Mercedes.

“It’s such a shame, the car has been good here and, even if it wasn’t going to be easy, I think there could still have been an opportunity to score points today,” the Japanese rookie said.

“It’s just unfortunate, the car next to me got sandwiched and then I was hit, these things happen in racing though.

“Overall, this race week has been really good, as the performance of the car has been strong, so it’s so disappointing not to be finishing the race,” Tsunoda concluded.

With this result, AlphaTauri are now level with Alpine on 106 points in the Constructors’ Championship, with four races to go.