Verstappen: A long run to Turn 1 so let’s see what happens 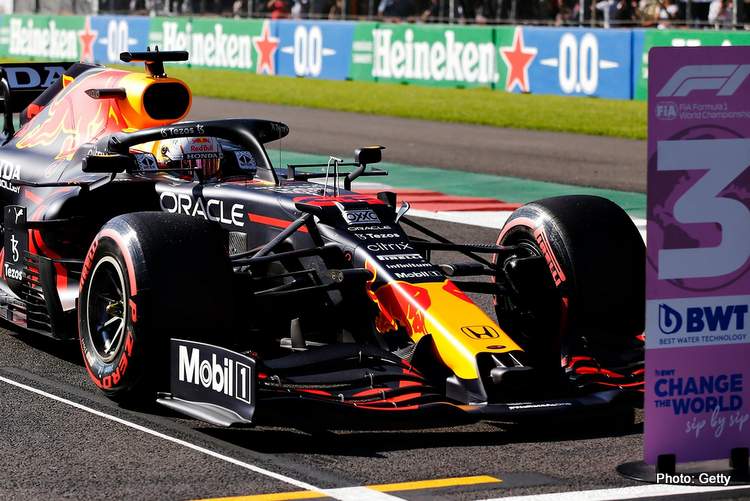 Max Verstappen was expected to clean up in qualifying for the 2021 Mexico City Grand Prix, but Mercedes turned on the heat by locking out the front row meaning the Red Bull driver will start from third place on the grid.

Talk before qualifying was how Red Bull would stay ahead of Mercedes to Turn 1, 800 metres from the start line, such was the dominance of Max Verstappen and Sergio Perez FP3 on Friday.

But in the hours between sessions, Mercedes unleashed some mighty muscle which gave Valtteri Bottas the ammo to snatch pole against the odds, with Lewis Hamilton second and Verstappen, shy six-tenths of a second when it mattered in Q3, third best.

However, the fact that both Bulls, on the second row, line up behind the Mercs on the grid could well be a blessing in disguise as the Black cars are sure to cut a hole through the air which could vacuum one or both of the Blue cars into P1 by the time they exit that ‘chaos-waiting-to-happen’ first turn.

Perhaps aware of this Verstappen was not as morose as one would expect after such a result, especially after his final Q3 run was scuppered when an errant Yuki Tsunoda forced Perez off-track which in turn hampered the Dutchman who cursed at the moment but cooled down rapidly.

In Parc Ferme, not particularly flustered, Verstappen said of his qualy session: “On the last lap I was on for a good lap – then two guys went off and I thought that there was going to be a yellow flag and I backed out and the lap was destroyed.

“Third is not amazing but I still think it’s better than starting second. Qualifying didn’t go our way – but we are not using these tyres anyway so still a lot to fight for.”

Later he added in the Red Bull team’s Mexico Qualifying report: “P3 isn’t so bad considering we were really struggling to get the tyres to work today, we were sliding around a lot.

“My first lap in Q3 wasn’t great, the grip was terrible so when I saw the gap to Mercedes, I thought that was fair enough. We needed to find a better balance in the car so we tried to make a few changes to how our car was running and then I think the second lap of Q3 was looking okay.

“I don’t know what happened in front of me but I saw Checo and Yuki both go wide and I saw a lot of dust so I thought that a car had crashed. I’ve been caught out by yellow flags here before so I slowed down, as a result, I lost a lot of momentum and time.

“It’s a shame that we both aren’t locking out the front row after being so competitive all weekend.

“Tomorrow is a new day and hopefully, the race will be exciting, there’s a long run to the first corner so let’s see what happens,” added Verstappen who will be looking to extend his 12 point world championship over Hamilton at a venue where the pair have each won twice.

Things did not go according to plan for Red Bull in qualifying 😕#MexicoGP 🇲🇽 #F1 pic.twitter.com/tGZSk2AtKU