McLaren: Today was all about teamwork 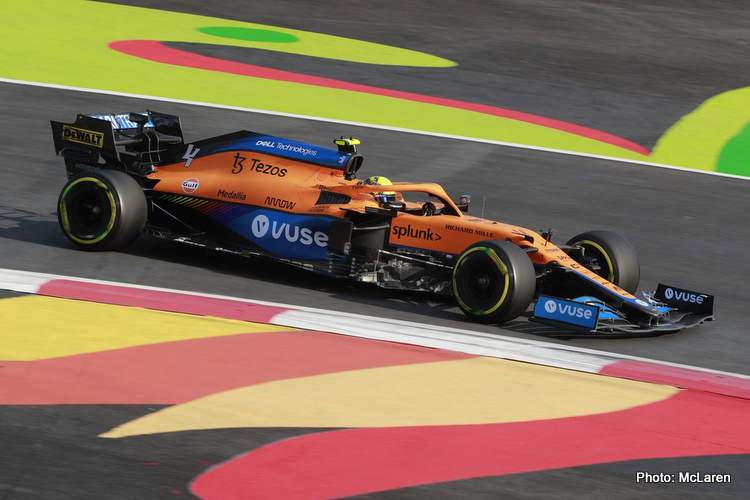 McLaren started the weekend of the 2021 Mexico City Grand Prix on the back foot, struggling for pace, but were able to turn their fortunes around with Team Principal Andreas Seidl insisting it was all about teamwork.

The Woking squad was never close to competitive from the moment the Papaya cars rolled on the Autódromo Hermanos Rodríguez on Friday. To make things worse, the team had to give Lando Norris his fourth power unit of the season which meant a relegation to the back of the grid on Sunday.

However, FP3 saw McLaren advance into the top ten, and during qualifying did well to put Daniel Ricciardo seventh after a tow from Norris who finished tenth, but will start 18th due to his penalty.

“Today was all about teamwork,” hailed Seidl. “With Lando taking his fourth power unit of the season and going to the back of the grid, the challenge was to get Daniel as high up as possible, with Lando’s help.

“The team and the drivers developed a programme to do that and executed it very well this afternoon. We’ve achieved pretty much everything we wanted to achieve today,” the German revealed.

“After a tough start into the weekend yesterday, the team stayed focused and worked hard and came back strongly today, with a car that was competitive on pace against our immediate rivals.

“Starting P7 and from the back of the grid means our drivers face different challenges tomorrow, so tonight we focus on preparing for those scenarios, while looking forward to another exciting race,” the 45-year-old concluded.

Ricciardo who suffered from reliability over the course of the weekend, admitted to a small mistake that ultimately prevented him from beating both Ferraris in qualifying.

“It’s a little bittersweet because obviously Carlos [Sainz] is two-milliseconds in front, but to split the Ferraris is not too bad around here,” the Australian said in his team’s press release.

“We worked as a team well, with Lando giving me some help. I think the clean side of the grid should be OK tomorrow.

“I made a little mistake in Turn 13 which I think cost me sixth but the clean side of the grid isn’t a bad offset, so we’ll work with that.

“We did make improvements going into today, yesterday was tricky as we missed a lot of running,” Ricciardo pointed out. “We hit the ground running and I think we have to be fairly pleased with P7.

“We’ll try to get a couple off the start tomorrow,” the Honey Badger concluded, hinting at executing a few of his signature overtakes during the race.

Lando Norris was not happy with his car over the course of the weekend, and the power unit penalty came to compound his misery, but the Briton was nevertheless satisfied with the team’s turnaround, and the outcome of qualifying.

“A good enough day, I don’t think there was a lot more we could do,” he admitted.

“We helped Daniel to get into the best position possible, which we achieved,” the 21-year-old explained. “We struggled a little bit with the car in general, but we’re still hopeful for a positive result.

“I think we can have a good race, but we’ll need to work hard tonight to give ourselves a good plan going into tomorrow,” concluded a cautiously optimistic Norris.

McLaren will have their plate full trying to fend off  Ferrari’s attack during the race on Sunday, with the Scuderia able to lean on both its drivers Carlos Sainz and Charles Leclerc who qualified sixth and eight respectively.

With Norris out of the picture, Ricciardo will be fighting the two Ferrari drivers sandwiching him with one hand tied behind his back, as he seeks to help his team with their fight over third in the Formula 1 Constructors’ Championship with the Maranello squad.