Bottas: I hope to win, if not I will help Lewis 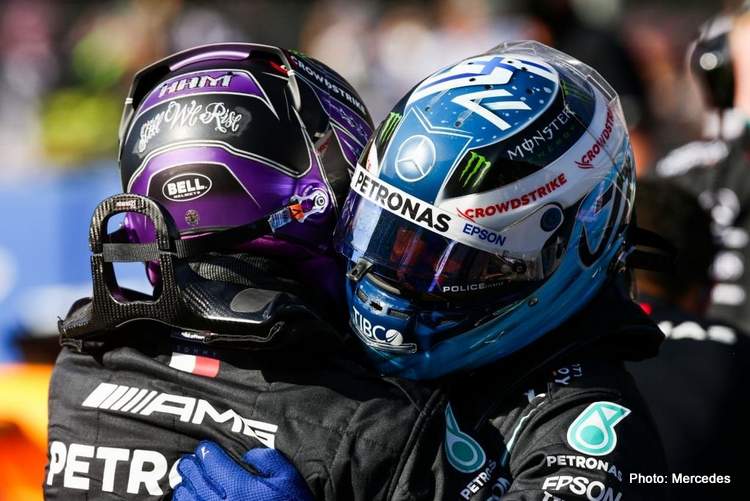 The Finn hoped, however, that he might yet have the chance to win: “I need to enjoy this pole for a bit but then switch my mind for [the race].

“You never know what the race situation will be. I still am 100% sure that there could be a circumstance where I could still win the race and I believe in that and I hope for that.

“But if not then I will support Lewis and get the maximum points for us as a team,” Bottas told Sky Sports television after leading seven-times world champion teammate Hamilton in a qualifying one-two at the Autodromo Hermanos Rodriguez.

Hamilton is 12 points behind Red Bull’s championship leader Max Verstappen, with five races remaining, and Bottas has played a supporting role already this season with Mercedes 23 points ahead in the constructors’ standings.

The Finn is leaving the team for Alfa Romeo at the end of the season.

Mexico City had been considered a Red Bull track but qualifying turned that notion on its head and gave Hamilton a real chance of regaining the momentum after defeat in Texas two weeks ago.

That Austin circuit had been supposed to play to Mercedes’ strengths.

“Valtteri did an amazing job today and we are both, and I think probably everybody in the team, shocked that we own the front row because they (Red Bull) have been quicker than us all weekend,” said Hamilton. “It was a real shock.

Mercedes team boss Toto Wolff had revealed that the team strategists had been working on the basis of the drivers starting third and fourth on the grid. Qualifying gave them a lot more to think about.

“Things are just completely different,” said Hamilton. “Last night there would have been simulations of what we do from third or fourth. It was not on the table to get (the front row)…there was no way we were going to get pole.

“To have done so is great work from the team,” he added. (Reporting by Alan Baldwin)