Bottas: An awesome lap but we need a good start 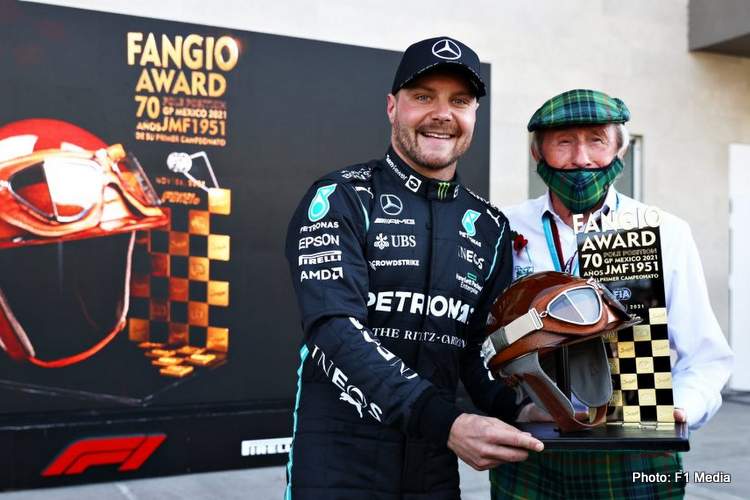 Valtteri Bottas surprised all with a superb lap to claim pole for the 2021 Mexico City Grand Prix for Mercedes, at a track that was expected to suit Red Bull.

The Finn, who departs Mercedes at the end of this season for Alfa Romeo, is in fine form since that announcement and on Saturday at Autodromo Hermanos Rodriguez delivered one of his finest laps to claim pole position, his 19th in Formula 1.

Bottas gave a hint of what he had in hand as early as FP1, but thereafter Mercedes appeared to lose the high ground but came back strong when it mattered on Saturday afternoon local time.

He reported afterwards: “It was an awesome lap! Especially my lap in the first run of Q3. I couldn’t quite match my sectors in the second one, but I think honestly that first run in Q3 was one of my best laps. It’s a good feeling!

“This morning actually the car was really good: we were lacking a bit of pace on lap 1 but I think with higher temperatures this afternoon than in the morning it came our way. We also tried to optimise everything with tyres, temps and setup and it was a joy to drive!

“Looking ahead to the start, it is a long, long straight and for sure, the cars behind with the tow will have good opportunities so we’ll need a good start and at least, as a team, it’s good that we have two cars ahead and hopefully we can try and keep the positions,” added Bottas.

Even teammate Hamilton was impressed: “Valtteri did an amazing job, I’m so proud of him! I think he’s been driving so well these last few races so it’s great for the team – they’ve been working hard.

“We didn’t think we had the pace this weekend so to lock out the front row is pretty special and obviously gives us a good fight with the others tomorrow. I’m not sure where we found the performance compared to Red Bull but once we got to qualifying we had good pace.

“I’m as shocked as everyone but we’ll still take it!” added Hamilton.

A front row lockout is just what every team boss would want in qualifying, Toto Wolff – no stranger to them – was nevertheless chuffed: “That was a fantastic qualifying session and we managed to put together the puzzle piece by piece as qualifying played out.

“To lock out the front row here in Mexico is a strong starting point for tomorrow’s race, and it also shows the hard work that has gone into adapting our car and power unit to the challenges of running at altitude.

“It was very enjoyable to see how Valtteri is driving right now – he was unbelievable in Turkey, and he’s working so well with the team,” added Wolff.

Meanwhile, Bottas has done his part in ensuring that Mercedes lead the F1 constructors’ championship by 23 points over Red Bull, after 17 rounds, and Bottas is sure to be a factor should team orders be required so that teammate Lewis Hamilton, who starts second, can inflict the most damage on Max Verstappen’s 12 points lead in the title race.