Sainz: A challenging Friday as always here in Mexico 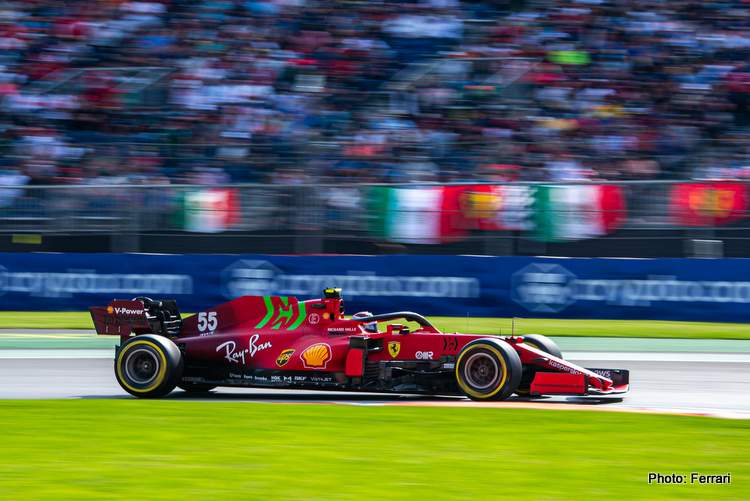 Despite Ferrari being in decent shape at the Autódromo Hermanos Rodríguez, featuring at the sharp end of the midfield, Carlos Sainz insists  Friday was challenging for the Scuderia in Mexico.

Sainz admitted previously to having a bad history at the Mexican venue, while vowing to put in a good performance this time around, specially as his team has set the target to secure third in the Formula 1 Constructors’ Championship, with McLaren competing with them for it.

Despite the Spaniard being ahead of his teammate Charles Leclerc in both practice sessions on Friday, he seems to be struggling to get to grips with his SF21, something Sainz touched on in his team’s media brief.

“A challenging Friday as always here in Mexico, where the lack of grip affects the behaviour of the car a lot,” he revealed.

“We tried some changes from FP1 to FP2 which didn’t seem to work, so we came back to this morning’s set-up during the session to try and replicate the balance I had in FP1 when I was happier with it,” the 27-year-old explained, who was sixth in FP1 and fifth in FP2.

“Tomorrow we’ll try other alternatives to see if we can keep finding lap time and improve the overall performance of the car.

“Some of our competitors look very quick so it’s going to be a tight fight,” the Spaniard admitted.

Sainz then spoke of the amazing atmosphere created by the fans attending the race weekend.

“Whenever I switch off the engine, I can hear the fans shouting loud in the grandstands,” he revealed. “It’s been great to see so many Ferrari flags out there here in Mexico.

“We feel the support and we will try to put together a good weekend for everyone watching,” the Ferrari driver concluded.

Charles Leclerc didn’t have a better Friday, as he spun early into FP1  at Turn 16 and damaged his car’s rear wing, and ended up sitting out most of the session, before returning to the track towards the end to achieve eighth place, two tenths down on his teammate.

However the 24-year-old is enjoying his time in Mexico.

“It’s great to be back in Mexico City!” he said in the team’s press release on Friday.

“The atmosphere here is amazing as always. Even before arriving at the track, it’s really impressive to see so many fans around town and we really appreciate everyone’s support.

“Our sessions today were quite different,” the Monegasque pointed out. “In the morning, there was a lot of dust on the track, which made it quite slippery and tricky to drive, especially in terms of braking.

“The track evolution was significant between FP1 and FP2,” the two-time winner explained. “Lap after lap, you could feel that you are getting faster.

“It’s still difficult to compare ourselves to the others and understand exactly where we are,” cautioned Leclerc.

“For tomorrow, we just have to focus on putting together the best lap we can and then I am confident that we have the potential to do a good job this weekend,” the Ferrari star concluded.

Regardless, Ferrari seem in a much better situation than McLaren, their rivals for third in the Constructors’ Standings, whose drivers’ Daniel Ricciardo and Lando Norris, never featured in the top ten in either of the Friday practice sessions.