Hamilton: Red Bull are just a bit quicker than us 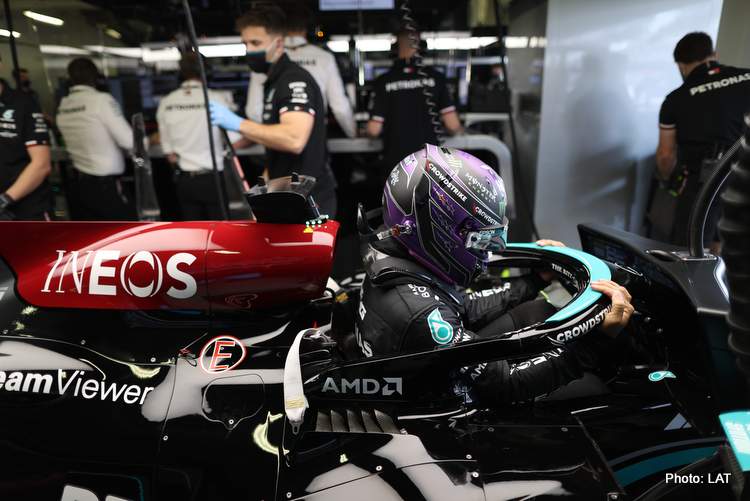 Lewis Hamilton is not really sure the package at his disposal is as good as his title rival’s, and admitted that Red Bull and Max Verstappen are quicker at the moment in Mexico.

With the dust – literally – settling after practice on Friday in Mexico, the seven-time World Champion found himself second and third in FP1 and FP2 respectively.

So unless the reigning world champions find a solution to unlock some pace from their W12, Hamilton will be in for a tough weekend, while already being 12 points behind Verstappen in the Formula 1 Drivers’ Standings.

Hamilton spoke of his Friday impressions during his team’s post practice press release.

“The car’s generally feeling okay and we’ve not had any major issues today – we’re giving it everything we’ve got and Red Bull are just a bit quicker than us right now,” he admitted.

“We’ve been chipping away at the set-up and trying to improve it, but you can see we are lacking a bit of overall downforce here and that shows in the lap times,” the Briton explained.

“It was great to see lots of people came out today, and I’m looking forward to continuing the battle this weekend,” the Mercedes ace concluded.

Valtteri Bottas, on the other side of the Mercedes garage, had a comparatively better day than Hamilton and leading him in both practice sessions, but by the slightest of margins.

“It was a tricky start to the day with low-grip conditions and the dusty track,” Bottas revealed.

“This made it hard to get a proper read on the car but nevertheless, it felt not too far off how it should be, and that mean we could fine-tune things for FP2,” the Finn explained in his team’s media brief.

“This afternoon, the car felt okay but there’s still time we need to find because Red Bull look quick.

“They seem faster than us right now, and they showed strong pace on the Soft tyre on a single lap, so we need to find more time if we want to fight for pole,” the Alfa Romeo-bound driver admitted.

Mercedes were considered as favorites to win the previous race in Austin, but failed to meet those expectations, with Red Bull taking the win and third with Verstappen and Sergio Perez respectively.

Now competing at a circuit that technically favors their rivals, the team that has won it all since the start of the Turbo-Hybrid era in 2014, will have their work cut out to reduce their deficit to the energy drinks outfit, as despite still leading Constructors’ Standings by 23 points, Hamilton, their lead driver, trails Verstappen by 12 in the drivers, and an on-form Perez would be a decisive factor in the title fight.

However, it would be naïve to rule out the Brackley squad and their star driver from hitting back, as the season edges towards its conclusion. (Follow me on Twitter @MallakJad)