Bottas: If I need to help Lewis sensibly, I’ll do it too 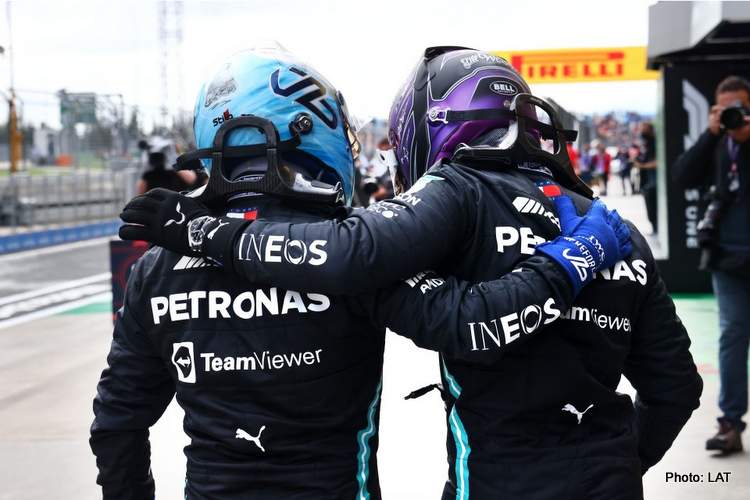 The Austrian’s admission came in an interview with RTL, when he was asked about the team dynamics, given the fact that Bottas is on his final five races for the team before he leaves for Alfa Romeo next year.

“You always have to be aware that Valtteri drives for himself, it’s also about his career,” he said. “But he’s a team player. He was totally dominant in Turkey, by far the best man on the track,” the team boss went on, and insisted the Finn’s result in Austin would have been much better had he not received the engine penalty.

“It would have been absolutely possible from the speed alone.”

The Mercedes boss lamented the fact that they had to deal with two Red Bulls in Austin while Bottas was AWOL: “Perez was always in our window. We knew that we could finish third in the worst case and that’s why we had to take the strategy into account.”

And on the prospect of Bottas going rogue and doing his own races, the 49-year-old admitted that was possible: “The thought certainly plays a role, but Valtteri knows full well that this is a driver’s world championship which is extremely important for Lewis.”

And despite the likelihood of the future Alfa Romeo driver gets tempted to go for some silverware while he still can in a field-leading car, and trying to win a race, Wolff said their are some factors Bottas might want to consider.

“But of course you don’t want to be responsible for the fact that your team-mate loses the drivers’ championship at the same time,” was his subtle warning to the Finn.

However, it seems that Bottas is still happy to play his “Wingman” role till his last minute as a Mercedes driver, based on his statement to Motorsport Magazin.

“Realistically, I’m not in the title fight and I’m a team player,” he admitted. “If there is a chance to help Lewis sensibly as a team-mate in his battle for the title, I’ll do it too.

“That’s my mindset. It’s no different than a few races ago.”

With the 32-year-old seemingly performing better recently he revealed: “Knowing what I’ll do in the future helps of course.”

“I can enjoy the moment. And when you do that, you drive better.”

He then set his personal target for this season: “The fifth joint constructors’ title is important to me.

“That would be a great achievement. Hopefully I’ll get as many points as I need for that,” Bottas hoped.

Bottas is currently third, 35 points ahead of fourth-placed Sergio Perez in the Drivrs’ Standings, as his team leads Red Bull by 23 points in the Constructors’.

However, his ultimate target would be to help his seven-time World Champion teammate, Lewis Hamilton, achieve a record-breaking eighth title, as he battles with Red Bull’s Max Verstappen for F1 supremacy in 2021.