Villeneuve back to winning ways 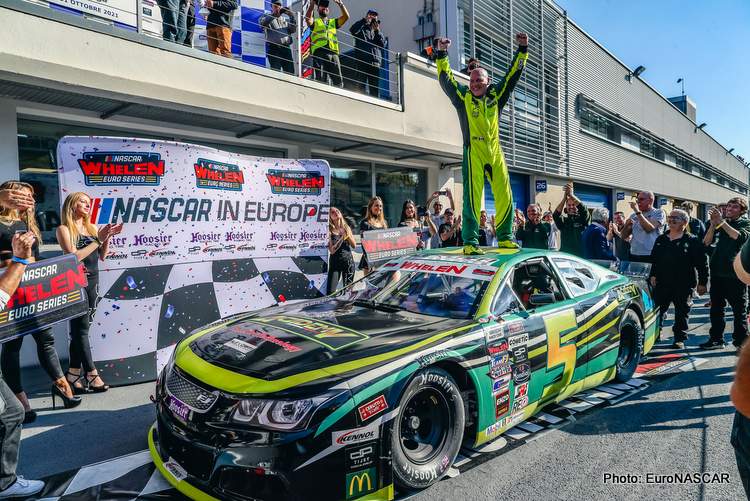 Jacques Villeneuve is back to winning ways, as the former 1997 Formula 1 World Champion has won for the first time while competing in NASCAR Whelen Euro Series.

The Canadian’s win came at the opening race of the final weekend for the series at the Autodromo di Vallelunga in Italy, overcoming a five-second time penalty.

Villeneuve was clearly ecstatic about his result and was speaking to motorsport.com.

“Finally, it’s been a long time coming,” he said. “We have been fighting at the front a lot and the car was good in the race. We had a hard time in practice but in qualifying the car was really amazing.”

The Ex-Formula 1 racer, who remains to date the last driver to bring the the Drivers’ and Constructors’ Championships into the Williams F1 team’s coffers since 1997, spoke of the penalty he received which did not stop him from claiming  the win for the Academy Motorsport/Alex Caffi Motorsport team.

“I got a penalty at the start,” he said, “I’m not sure why because the rules say ‘go’ on green, so I must have missed something in the rulebook, so I’ll go check.

“But a good thing I jumped the start because I didn’t have the horsepower against Alon, which was obvious until Turn 1,” the winner of 11 grands prix pointed out.

The 50-year old pointed out that his previous experience on ovals Stateside played a role in his maiden NASCAR Euro Series triumph.

He revealed: “I guess having raced so much on the ovals in the States, I didn’t have to lift on the outside of Turn 1 there.

And summed up: “I just went for it and Alon lifted.”

Villeneuve’s win rounded up a season where he sits ninth in the standings with one win, two top-five finishes, and four top-ten finishes.