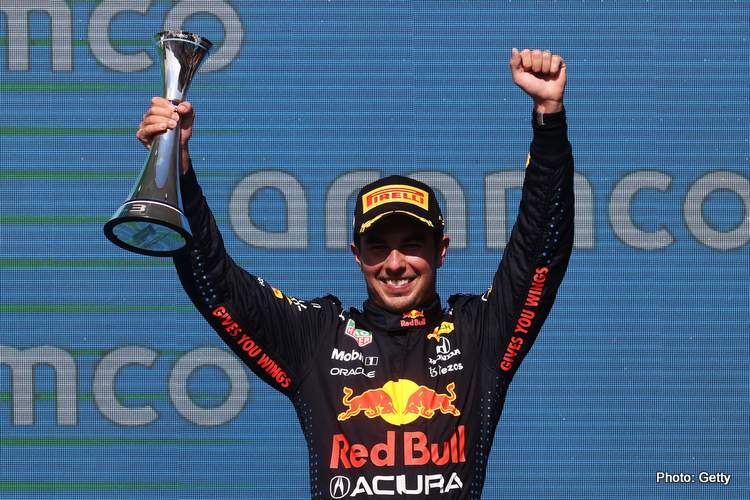 Sergio Perez has been on an upward trend in the last couple of races making two podium appearances in a row, and his boss Christian Horner thinks that confidence is the reason.

Although 2020 marked one of Perez’s best seasons in Formula 1, where he achieved his maiden victory for Racing Point (now Aston Martin) at the Sakhir Grand Prix in Bahrain, that year was almost his final one in top flight, as he was let go by the team to be replaced by four-time champion Sebastian Vettel.

With Red Bull struggling to find a driver within their program to pair up with Max Verstappen, and play a decent supporting role to the Dutchman’s championship campaign, the team went against their norm and hired Perez who was not previously associated with the energy drinks company.

The move was highly popular among the fans, and despite struggling to match his teammate in qualifying, Perez has put in some impressive Sundays for the team winning in Baku, and seems to have turned a corner recently with a couple of solid races in Turkey and Austin.

Asked by Motorsport.com about the reason behind this upturn in the Mexican’s performance, after a strong weekend at the 2021 United States Grand Prix, Red Bull Team Principal Christian Horner said: “I think it’s confidence.

“It’s been coming for the last few races,” the Briton explained. “Monza he was strong, Sochi he was strong, he should have been on the podium at both of those races.

“He had a strong Istanbul, and he has been on the pace all the way through this weekend. So I think it’s just confidence.

“We need him delivering at this time of year,” Horner declared. “It’s a great result for him today.”

The 47-year old team boss revealed that there has been quite some work behind the scenes to get the car more to Perez’s liking, something that contributed to his recent form.

“I think we’re managing to find a set-up that works for him,” Horner said. “And managing to optimise the car around his style a little more.”

With the season entering its final five races, and the stakes being so high in the championship fight with Lewis Hamilton and Mercedes, Horner is counting on Perez to deliver the goods.

“There are some important races coming up, so we need doing what he did today,” he admitted. “He was unlucky not to get the pole yesterday.

“And so it’s been been great progress for him,” Horner concluded.

Austin saw Perez deliver a great qualifying session finishing third, and then drove a race he considered the hardest and longest of his life, after having to make due without his drinking bottle, nevertheless delivering the support his teammate and team needed on Sunday.

With Mexico being the next race, the man from Guadalajara, is naturally pumped up about performing in front of his home fans, and fancies a good result in a field-leading car.

“I think we have a good package. We will be strong over there,” he said.

Red Bull have historically performed well at the Autódromo Hermanos Rodríguez, prompting the winner of two grands prix to say: “Typically, Red Bull has been extremely strong in Mexico, so I look forward to it massively and I really hope that we can keep going on the podium again.”

Perez moved up to fourth in the Drivers’ Championship, after his recent results, 35 points behind Mercedes’ Valtteri Bottas, as his team moved closer to Mercedes in the constructors’ standings and are now 23 points behind.