Tech Draft: Where did Mercedes speed come from in FP1? 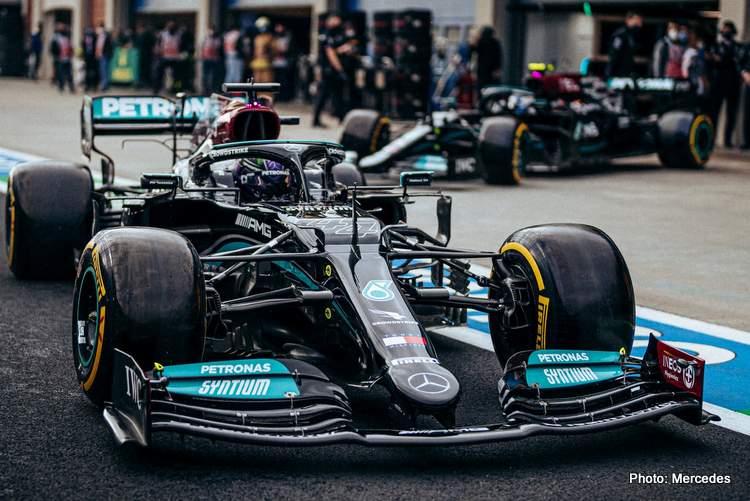 For many, the biggest technical story of the 2021 United States Grand Prix was Mercedes coming out of the box on Friday in FP1 with a nearly one-second advantage over their nearest competitor and abruptly losing it, never to be recovered.

Let’s make no mistake about it. Even though the Toto Wolff-fronted Mercedes PR machine has monotonously informed us in recent months that development updates to the W12 design have ceased, it is simply not true.

For Round 10 at Silverstone Mercedes introduced a revised detail to both the bargeboard area and to the “wedge” area of the rear diffuser, which has become renowned by many as the big differentiator for the 2021 season from a more technical point of view.

However, the intent of the updates wasn’t as obvious as many of us thought, and their effect was not necessarily fully realized on that weekend.

During and after the Turkish Grand Prix weekend many F1 media pundits and fans alike were questioning if, at times, a 15km/h speed trap delta between the W12 and much of their opposition was indicative of some sort of power upgrade that Mercedes had applied to their cars only, and not necessarily to their customer teams.

Most engineers with any sort of motorsport experience would debunk that theory fairly swiftly because simple physics tells us that with the same amount of drag, the power increase required to realize a speed delta of that magnitude is a quadratic function, which in everyday terms means that an increase in the 10’s of horsepower would be required, and not the meagre gains we see these days in F1 as power unit performance converges.

Rather, in 2021 a 15km/h speed delta can only realistically point to an aerodynamic efficiency gain.

Somehow Mercedes is reducing drag on the straights whilst retaining downforce in the corners.

Since around 2010, F1 engineering has gone away from the traditional sprung damper arrangement in suspension design, specifically at the rear end of the car.

The reasoning for this is twofold: by removing coil springs or torsion bars the unsprung mass of the rear end is reduced, but critically by removing compression/extension springs and replacing them with some form of heave control, an additional degree of freedom is added to the rear suspension system. 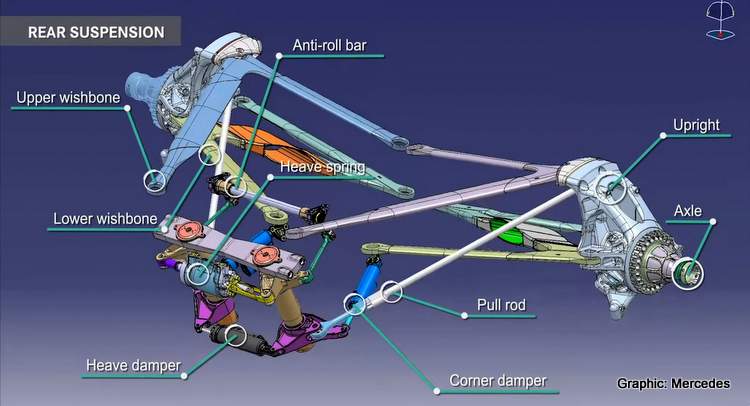 The inclusion of a gas heave spring or damper allows quite a reasonable degree of rear ride height control, much greater than that of a more conventional coil/torsion spring damper mechanism, which is critical given the importance of rear diffuser ride height sensitivities.

Even though heave control at the rear of an F1 car through the use of heave control dampers has been the norm for many years now, what Mercedes have been able to do is to fine-tune the damper to the Silverstone aero-updates so that when both pull rods are in compression at a certain pre-defined value when travelling a straight, to drop the rear ride height and stall the diffuser, significantly reducing drag and increasing straight-line speed, almost like a double DRS.

It is likely that this is achieved through some form of valving within the heave damper or some form of over-centre eccentric bell-crank mechanism.

When the straight line compression load reduces back under the threshold, such as throttle off-speed reduction or braking, the ride height increases at the rear again.

Importantly, it is a mechanically activated control device that is very legal, and its use to stall the diffuser is realistically only useful for low rake aerodynamic philosophies, such as that of Mercedes.

Whilst Red Bull apparently queried the FIA about the Mercedes diffuser stall device over the weekend, I suspect that they weren’t querying the heave control concept because they would certainly be using it to some degree themselves, but rather the non-linear or sudden mechanism in reducing rear ride height in certain specific conditions.

Of course, the issue of how this fits into the Mercedes performance drop off after FP1 on Friday in Austin needs clarifying.

After FP3 on Saturday, the media was fixated on the Red Bull garage as both the rear wings of Max Verstappen and Sergio Perez were hurriedly reinforced with additional layers of pre-preg carbon, not only needing laying up and trimming but also rapid curing, after cracks were observed.

However, the ever-vigilant media missed a bigger story and the one that more than likely explains the Mercedes performance improvement stall for the USGP.

In their post FP1 inspections, Mercedes engineers noticed that the diffusers on both W12’s had been bottoming so hard on the extremely bumpy Austin surface, which is in-fact the most aggressive for the season, that they had not only cracked, and were in need of repair, but they also required significant reinforcing that compromised their efficiency, and a significant increase in static rear ride height was also needed to avoid future bottoming, compromising their mechanical and aerodynamic setups for the weekend.

It would be highly unusual for a successful team such as Mercedes to inexplicably lose an almost one-second-advantage over its closest competitor over night, and along with their recent improvement in straight line speed, it would certainly seem plausible that diffuser stall, and heave control are important elements to Mercedes’ path to another Formula 1 Drivers’ and Constructors’ Championship this year.