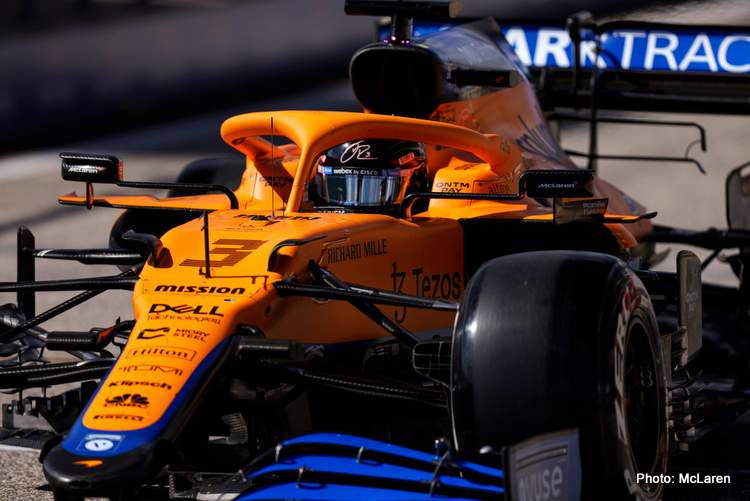 Daniel Ricciardo delivered a strong performance in the 2021 United States Grand Prix, outqualifying his teammate, and outracing one Ferrari, to finish fifth, something he thinks is really good on paper.

With Ferrari seeming to pick up the pace over McLaren, evident from the qualifying where the Papaya cars where no match for the Red one, Ricciardo’s fifth place keeping Carlos Sainz – later overtaken by Valtteri Bottas – at bay was a fine result for the Australian.

“I’m really happy,” Ricciardo said in his team’s race review. “We weren’t quicker than the Ferraris, so I’m happy to beat one of them.

“I had to defend pretty hard for a few laps there, so I’m happy to have held him off,” he explained. “It was a tricky race. I was fighting quite a bit to hold what I had, but I think on paper fifth is really good.

“It’s good points. We stole a little bit from Carlos [Sainz], and Valtteri [Bottas] got him at the end, so that was a bit of damage limitation,” the Aussie admitted.

“We’ll come back in Mexico and hopefully have a bit more to show against them. The fans were awesome, the crowd was sick, hopefully they enjoyed it,” Ricciardo concluded, really soaking in the great Austin atmosphere.

McLaren Team Principal Andreas Seidl had some good words to say of the team and Ricciardo’s performance on Sunday.

“A strong race for Daniel today, getting past Carlos [Sainz] on the first lap and then soaking up enormous pressure all the way to the flag,” he said.

“Good job from everyone at the track this weekend who’ve put in long hours in hot conditions, well supported, as always, by everyone back at the factory and our colleagues at Mercedes HPP.”

However Seidl was realistic about the result in light of Ferrari’s rejuvenation.

“P5 and P8 today here at COTA was pretty much everything that was on the table,” he revealed. “We were fighting a very strong Ferrari team this weekend and did well to get ahead of at least one of them and retain P3 in the Constructors’ Championship.”

Despite retaining third in the Formula 1 Constructors’ Standings, McLaren’s lead is now a mere 3.5 points, which is a major worry for the Woking outfit should the Scuderia’s resurrection continue over the final five races of the season.