Perez: The hardest and longest race of my life. 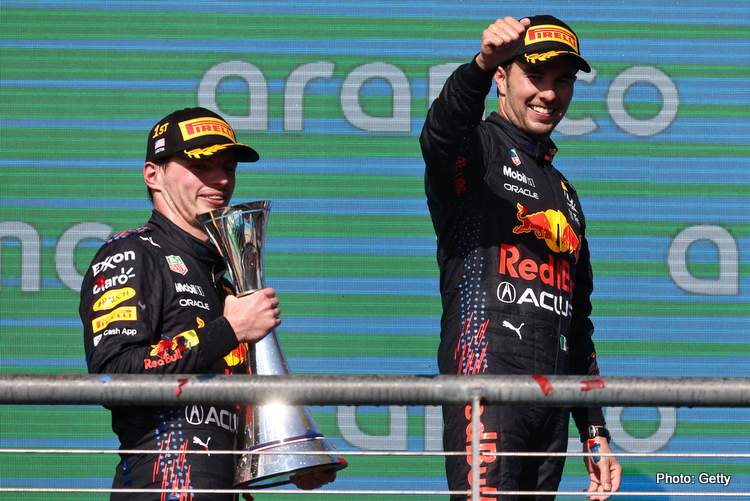 Sergio Perez was an excellent third in the 2021 Formula 1 United States Grand Prix, but had to survive what he labelled “the hardest and longest race of my life” to achieve this result.

The Mexican had to take the abuse of the Circuit of the Americas with its infamous bumpy surface and higher temperatures during the thrilling race without the basic luxury of having a working drinking bottle, and as a result was clearly worn out after the race.

“That was the hardest and longest race of my life,” he said in his team’s press release. “I wasn’t feeling great before the race and then my drinks system stopped working on the first lap and with the hot weather today it was very physical and a pretty tough afternoon.

Perez went on: “I was struggling massively and by lap 20 I was done, so it was a shame I couldn’t keep up with Max and Lewis but there are a lot of positives to take from this weekend and back to back podiums are always nice.

“It’s a good result for the Team, the undercut worked well and Lewis had no option but to cover me which helped Max out in front, so we can be very happy as a Team.”

Revealing that Austin is like a second home race for him, the 31-year old from Guadalajara, will now be getting ready for his actual home race in Mexico in a fortnight.

He revealed: “I’m so looking forward to Mexico, the Team have done well there in the past and I think we’ll have a good package for my home race.

“I can’t wait and I hope to be on the podium again in front of my home fans,” he concluded.

Red Bull team boss Christian Horner was full of praise for Perez, while being sympathetic with his driver’s misfortune.

Horner said: “It was a tough race for Checo with no drinks system, but again the way he managed the race was fantastic and you can see him growing in confidence with his second podium in consecutive races.

“He produced a phenomenal drive and with his home race coming up he’s finding his form, which is crucial for us at this time of year,” he explained.

“It’s five to go now, and we know that there are a couple of races where Mercedes will have the edge and a couple where we will be strong, so the rest of the season is going to be really tight,” warned the Briton whose team closed the gap to Mercedes in the Constructors’ Championship to 23 points.

Perez’s recent run of strong results means that he has usurped Lando Norris in the drivers’ standing to fourth, albeit by one point only, whereas his teammate Max Verstappen extended his lead over title rival Lewis Hamilton to 12 points with five races left in the season.

Someone get this guy a drink 🥵🏆 pic.twitter.com/wXmX3moMJq