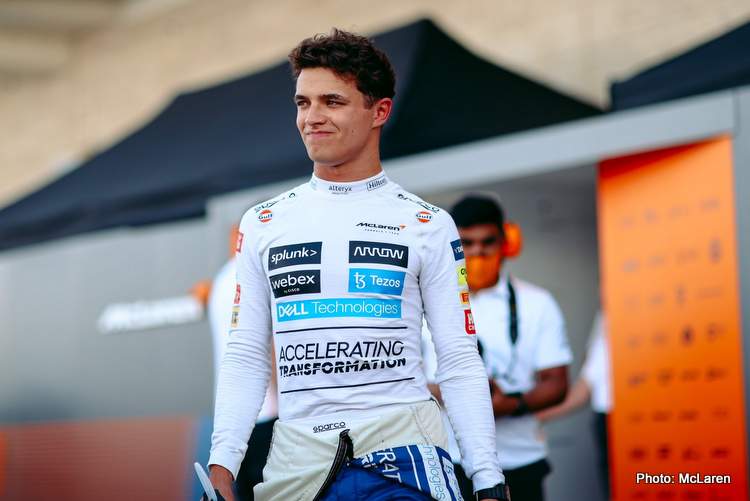 Lando Norris was not his usual brilliant self at the 2021 United States Grand Prix, outqualified by his teammate and finishing eighth on the a day where he could’ve done better.

The only exciting part about Norris’ race in Austin would have been his early tussle with teammate Daniel Riccirado who went on to finish fifth, and Ferrari’s Carlos Sainz who also beat him to seventh.

The young Briton reflected on a tough day at the office in his team’s media brief.

“A very difficult race today,” he revealed. “The wind conditions and the temperature made it very difficult to look after the tyres, so that meant we struggled quite a bit with pace compared to the Ferraris, who were strong today.

“I also think there were some areas I could’ve done better, including defending on some moves,” Norris lamented.

“The start was pretty exciting but we just weren’t able to stay ahead of the Ferraris in front. So, not a great day today, but we’ll pick ourselves up and look forward to Mexico.

“I just want to get back in the car already and keep working hard to make some progress in our championship battle,” the young McLaren star concluded, clearly looking to put his disappointing weekend behind him.

Norris’ boss Andreas Seidl, was empathetic with his young charger, but applauded his tenacity saying: “With Lando not making up any positions at the beginning of the race, it became a difficult one for him, but he stayed right there in the hunt all the way to the line.

“We’ll go home now, regroup and analyse the race to see how we might get even more out of this package when we come back across the Atlantic for the Mexican Grand Prix,” the German concluded.

Norris’ disappointing race in Austin means that, fourth place in the Formula 1 Drivers’ Championship, which he has held for a while now, has gone to Red Bull’s Sergio Perez who’s tally is now 150 points, compared to the Briton’s 149.