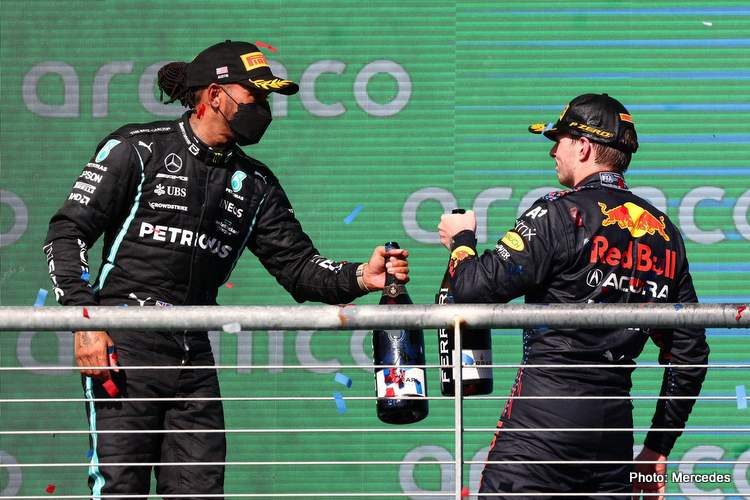 Lewis Hamilton did all he could to try and win the 2021  Formula 1 United States Grand Prix, but had to settle for second admitting that Red Bull just had the upper hand.

The seven-time World Champion was aggressive at the start of the race, taking the lead and forcing his title rival Max Verstappen off the track at Turn 1, but the aggressive strategy Red Bull devised, along with Verstappen calculated driving meant that Hamilton could not take the win, despite Mercedes’ strategy giving him fresher tyres for an end-of-race attack on the #33 RB16B.

Speaking in the team’s race review, Hamilton was gracious in defeat acknowledging his rival’s achievement.

“Firstly, congratulations to Max, he did a brilliant job today,” he said. “And also, a big thank you to the amazing crowd we’ve had in Austin all weekend, to perform in front of such packed grandstands and passionate fans has been a real honour.

“I really thought for a second we might be able to win, I gave it absolutely everything out there,” Hamilton reflected.

“It was such a tough race, but unfortunately, we couldn’t convert it. Red Bull just had the upper hand, and we couldn’t match them,” the Briton lamented.

“It looked like they had a better and more stable rear end on their car, with less sliding,” he explained. “The start was obviously great and closing the gap towards the end, but I got into the dirty air and the tyres overheated in the last few laps.

“Thank you to the team for amazing pit stops and so much hard work over the weekend. We didn’t quite get it this time, but we’ll move onto the next one,” Hamilton, who now trails Verstappen by 12 points in the drivers’ standings, concluded.

Mercedes Team Principal Toto Wolff echoed his driver’s feelings about the race in Austin, admitting that Red Bull were just too much for them to handle.

“This really was a race of interesting strategic games and great battles,” he said. “We thought we had a sniff at the victory with Lewis and he put in a brilliant charge in the final laps, but in the end it wasn’t enough.

“In the first stint, the car wasn’t quick enough on the Medium and then Red Bull went for a super-aggressive first stop, before covering it the second time,” the Austrian revealed.

“We thought our offset strategy, going longer, would be enough at the end to get them, but the moment you get within touching distance of the car in front, it makes it very difficult to make a move.

“In the end, we were close, but not close enough, so Red Bull deserved to win today,” Wolff summed up.

With this result, Mercedes saw their lead in the Constructors’ Championship cut down to only 23 points, and with the talks of their power units falling prey to reliability problems, the remaining five races of the season might prove to be quite the challenge for the Brackley-based outfit.