Ferrari: We have made progress 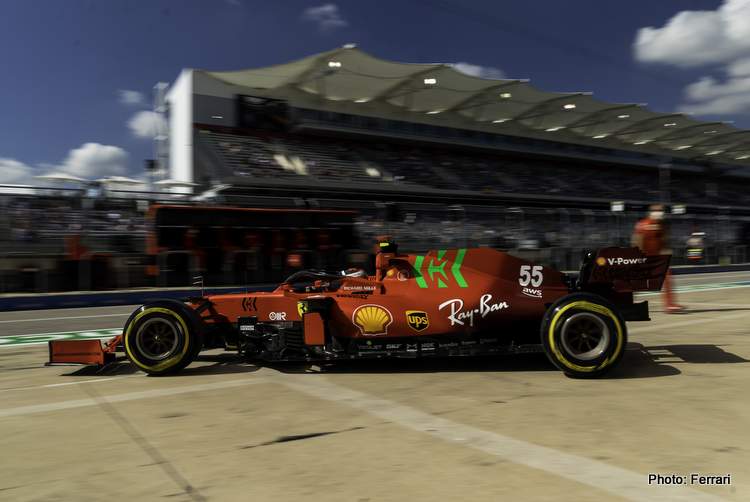 After skipping the Turkish Grand Prix, Ferrari’s Mattia Binotto was back with his team for the 2021 United States Grand Prix, and insists that they have made progress as a team.

However, the result on which the Swiss-born Italian based his assessment was bittersweet, for despite Charles Leclerc’s superb fourth place, the Scuderia missed a chance of extra points with Carlos Sainz, who could have finished fifth, had it not been for yet another pit stop blunder by the team.

Binotto reviewed the race in his team’s post-race briefing, he said: “We leave Austin having demonstrated, both in qualifying and in the race, that we have made progress even on a track that, on paper, is not particularly suited to our car.

“However, there’s some disappointment, because we did not do as well as we could have done, with the mistake at Carlos’ second pit stop costing him two places,” he admitted.

“We have always said we must use this season to make progress, because only if we are perfect in every area can we aspire to the higher echelons and we saw the importance of that again today. One slip up in what was overall a good weekend has cost us valuable points.

The team boss was clearly happy with both car, and driver pairing after Austin, which is positioning Ferrari perfectly in the fight for third in the Formula 1 Constructors’ Championship.

“Charles and Carlos were excellent today,” Binotto declared, “and in this part of the season, the performance of the SF21 has improved, partly thanks to the introduction of the new hybrid system.

“I believe we can fight for third place all the way to the end and that we have everything in place to achieve that,” he concluded.

Binotto’s greatest assets in the fight with McLaren for third, are his two impressive drivers, who had mixed fortunes at the Circuit of the Americas, Leclerc finishing a strong fourth as opposed to seventh for Sainz.

“What a race,” Leclerc said in the team’s press release. “It was definitely one of the most physical drives of my career.

“The rear was moving quite a lot and temperatures were high throughout. I am satisfied with my personal performance. I don’t think that I left much on the table today and I really pushed the car to its limit on every lap,” he explained.

“Our pace was a positive surprise,” the Monegasque went on. “Although we are mostly focusing on 2022, the few upgrades we have brought this year have allowed us to make some important steps forward.

“I would like to say a big thank you to everyone back home in Maranello at our factory as well as at the track for all the hard work they have put in. This weekend the result of their efforts has shown.

“Being back in the United States has been great and it’s been a real pleasure to race on this amazing track again,” the two-time race winner revealed, already looking forward to the next race.

“Next up is Mexico, which I am also very excited for,” said Leclerc. “The track there should suit our car fairly well and we will push to continue on this positive trajectory.”

Sainz, on the other hand, was left ruing the missed opportunity of achieving fifth on race day, due to his slow pit stop.

“It was a frustrating race for me because we had the pace to finish P5 but things didn’t go our way today,” he lamented.

“I had to fight with both McLarens on lap 1. It was an intense battle, with cars switching positions a lot, and in the end I let Ricciardo by thinking it was Lando.”

Sainz went on: “In the second stint, I was soon behind Daniel: we went for the undercut and it would have worked very nicely, overtaking him and having clean air behind Charles, but unfortunately we had a slow pit-stop and I was again stuck behind Daniel.

“I damaged my tyres trying different lines to pass him and eventually that allowed Bottas to catch us at the end,” he reflected.

Sainz was the happier of the Ferrari drivers over the course of the weekend, which explains why he would be more disappointed.

“I’m frustrated because the result did not live up to the potential of our package and I just hope our luck changes a bit after two consecutive races with unfortunate stops,” the Spaniard mused.

“On the positive side, the feeling with the car was good, so we’ll carry that into the upcoming triple header,” he concluded.

Ferrari’s Stateside foray has netted the team 18 championship points, compared tp McLaren’s 14, and as such they closed the gap to the Woking-based outfit to only 3.5 points, with five races remaining.