Verstappen: I still fully expect it to be tough out there 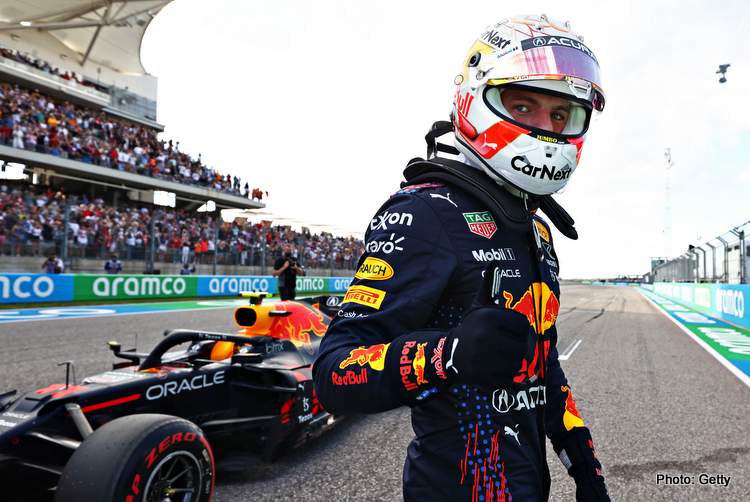 It was clear from qualifying for the 2021 Formula 1 United States Grand Prix, that it would be risky to bet against Max Verstappen getting pole, which he duly did but still expects it to be tough.

The turnaround that Red Bull and Verstappen achieved this weekend is nothing less than impressive, after starting FP1 on the back foot against a rampant Mercedes, but as the weekend progressed, the energy drinks outfit found the sweet spot for their RB16B, making their ace a happy man after qualifying at the Circuit of the Americas was concluded.

“I’m surprised after qualifying today but I’m of course very happy to be on pole,” the Dutchman said in the team’s press release.

“It hasn’t been the easiest of weekends so far for me, I’ve been chasing the balance quite a bit so to pull that lap together in Q3 was of course really satisfying,” he explained.

“I’m really pleased with the performance of the whole Team today and I’m glad we could finally pull it together for the final lap.

“We improved the balance and I felt a lot more comfortable in the car today compared to yesterday,” a satisfied Verstappen revealed.

“To show this pace in quali is positive for the race tomorrow but I still fully expect it to be tough out there, it’s going to be really warm and very hard on the tyres, which will make it more interesting,” the 24-year old warned.

“We just have to focus on ourselves tomorrow, hope for a good clean start and then be as fast as we possibly can,” Verstappen insisted.

It was just one of those good days for Red Bull, as Sergio Perez finally delivered the qualifying performance expected of him coming third. While second might have been perfect as he was on provisional pole for some time, he nevertheless helped encapsulate Lewis Hamilton – who was second –  between the Bulls.

“I’m pleased with today’s result but I can’t be 100% satisfied because we had the pace to be on pole,” the Mexican declared in the team’s media brief. “It’s a bit of a shame but it started raining quite hard on the final lap and I was the last car on track and I lost the time in sector three so we were a little unlucky in that regard.

“It was tense in that final run, we all knew it was coming down to that last lap and Max did a fantastic job as did Lewis and I think we each finished where we deserved to finish,” Perez admitted.

“I am taking a lot of confidence from this weekend because we’ve been really competitive and it just shows how hard we have been working behind the scenes to make this kind of progress and I expect to keep getting better.

“We are in a good position for tomorrow and it’s going to be a long race where anything can happen,” the ex-Racing Point driver predicted. “There’s also a lot of support out there from the fans and I really hope I can deliver a fantastic result for them too.”

Red Bull boss Christian Horner was understandably elated with his team’s performance, as they finally broke Mercedes’ monopoly on pole position at Austin.

“It was a great qualifying performance from both our drivers, a first and third, it’s a great place to be starting tomorrow’s race,” the Briton said. “It’s the first non-Mercedes pole here in the hybrid era and the first time we’ve had two cars against one, so another milestone for us.

“Lewis put in a great lap at the end there, the wind dropped and the times started to fall, but over the lap we had the quicker car.”

Horner acknowledged the massive improvement shown by Perez: “It was probably Checo’s best qualifying this year in normal conditions, so we are really pleased with that.

“Checo had provisional pole and Max responded and managed to improve, so phenomenal performances from both our drivers,” he said clearly satisfied with his drivers’ achievement after a difficult start to the team’s weekend Stateside.

“It’s tough to follow here and you definitely want to lead into turn one, so at least we’ve got two guys starting at the front of the field.

With this qualifying result, Verstappen will be naturally targeting to extend his six-point lead over Hamilton in the drivers’ standings, as his team looks to maximize on Perez’s high-starting grid slot to reduce the 36-point gap separating them from Mercedes.