Ricciardo: hard to do a perfect lap with the conditions 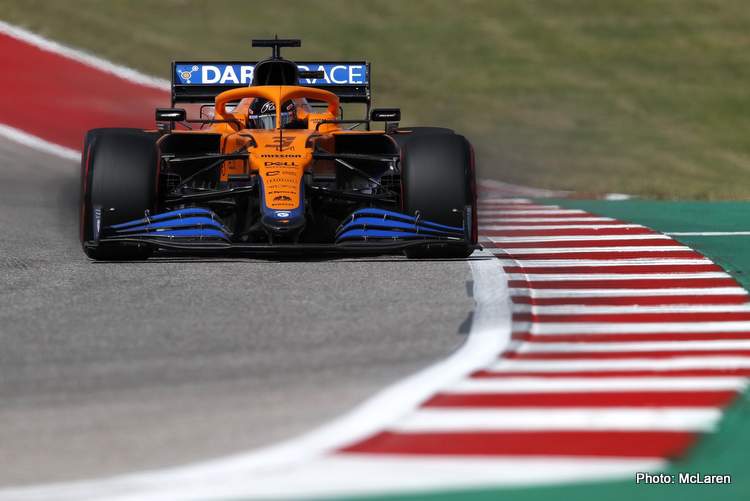 Daniel Ricciardo qualified seventh for the 2021 Formula 1 United States Grand Prix, ahead of Lando Norris, but said it was hard to do a perfect lap with the conditions of the track.

However, both McLaren drivers failed to outqualify the Ferraris of Carlos Sainz and Charles Leclerc, which won’t help their team’s efforts in the fight the all important third spot in the Constructors’ Championship.

Ricciardo reflected on his qualifying session in the team’s session review, on a day where he beat his highly rated teammate.

“Both runs in Q3 were really close with Carlos [Sainz],” the Aussie said. “I was happy to have the clean side of the grid but then I remembered Bottas has his penalty.

“I was most happy in Q1 with the car, and then it got a little more difficult through the session,” he went on. “I don’t think the track improved that much as the session went on. So, I felt like I was fighting it a little more.

“The last lap was okay, considering it was hard to do a perfect lap with the conditions, so it was clean enough – I don’t think there were two or three tenths in it.”

Ricciardo admitted it was a tall order to beat the Ferraris on this occasion: “Obviously with small margins you could always say Sainz was achievable, but beyond that, I don’t think Charles [Leclerc] was within reach.

“There’s obviously the battle that we’ve got with Ferrari, so they got us today, but with Sainz starting on the Soft, hopefully we can come back tomorrow,” the Honey Badger concluded, adamant that his team still has a chance to fend off the Scuderia’s assault in the constructors’ race.

Norris, on the other hand was not happy with his qualifying performance despite being beaten by his teammate by 0.079s only.

The Briton explained: “I’m not too satisfied with the result today, for two reasons: one, I think I could’ve done a better lap, and two, we’re behind both Ferraris.

“So, it’s not what we wanted today – but we’ll try to make up for it tomorrow. We’re starting on the Medium tyre and one of the Ferraris is on the Softs, so maybe we can take advantage of that and finish ahead of them,” Norris continued.

“We’ll work on our strategy overnight and make sure we’re ready for any opportunities tomorrow,” the one-time pole sitter closed.

McLaren team principal Andreas Seidl lamented not beating Ferrari in qualifying, despite a decent effort from his team and its drivers.

The German reflected: “P7 and P8 for us today is a solid result from qualifying – just not quite enough to get ahead of the two Ferraris.

“Tomorrow’s race is going to be interesting: ambient conditions will be hot, tyre management and strategy will be key,” Seidl explained.

“We’ll work hard overnight with a view to making up some positions and giving our fans in this brilliant crowd something to cheer,” the team boss promised.

McLaren’s third place in the Constructors’ Championship is under threat, since the 7.5 points cushion they have over Ferrari in fourth is hardly secure, with the Red Team making advances with their performance, keeping in mind six races remain to be contested this season.