Leclerc: Not an easy Saturday 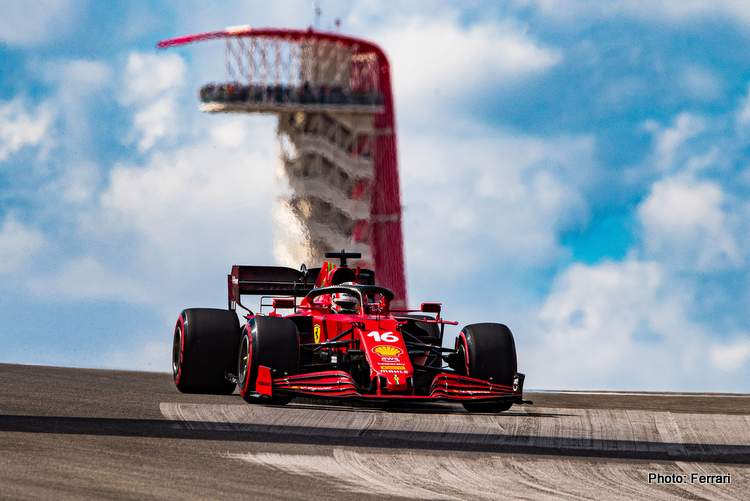 Ferrari were best of the rest in qualifying for the 2021 Formula 1 United States Grand Pix, but despite this decent result, Charles Leclerc admitted that it was not an easy Saturday for him.

The Monegasque clearly struggled throughout the three practice sessions to get on top of his SF21’s handling, while his teammate Carlos Sainz seemed more in sync with his ride.

However, Leclerc was able to overcome his issues during the all important qualifying session, achieving fifth place behind Mercedes’ Valtteri Bottas by less than two tenths, but ahead of Sainz.

Speaking in his team’s media brief, Leclerc said: “It was not an easy Saturday for me, but in the end I can say that I am very satisfied with how qualifying went and that my day ended in a crescendo.

“It started with some difficult free practice sessions, in which I had made a good first attempt but then I struggled a lot in the second because I didn’t feel well in the rear and consequently I was not comfortable in the car.

“We made some changes and entered Q1 by doing several laps that allowed me to regain confidence, so from Q2 onwards I was able to push to the maximum again,” the two-time race winner revealed.

“Having set my best lap at this stage with the Medium compound should be an advantage for tomorrow’s race,” Leclerc said pointing out his tyre strategy advantage.

“We will also gain a position on the grid and so Carlos and I will start fourth and fifth, even if for me this will mean having to start from the dirty side of the track.

“I will give my best to bring the team a good result in tomorrow’s race,” the 24-year old Ferrari star vowed.

On the other side of the Ferrari garage, Sainz was oozing with confidence all weekend, and despite being outqualified by Leclerc, he expressed his content with his qualifying performance.

“Overall today is a good result and I am satisfied because I felt comfortable with the car all weekend,” Sainz said in Ferrari’s press release. “My two fastest laps in Q3 were solid and strong, so I can be quite happy.

“The only downside is that I will be the only one in the top eight to start the race on Soft tires,” the Spaniard retorted.

“We were confident that the track would improve and that I could beat the time I had achieved with the Softs but in the second part of Q2 the wind picked up, the track was slower and we all struggled to go faster.

“We will analyze what happened, but now is the time to focus on how to best make my strategy work tomorrow,” the Madrid-born driver explained. “We have a good pace, I have positive sensations from the car and we know we have to be aggressive.”

“Let’s see how the race will evolve,” Sainz concluded.

The positive aspect of qualifying for the Scuderia, is that both its drivers outqualified their McLaren counterparts, which fares well with the Maranello squad’s target of securing third in the Constructors’ Championship, where they currently sit fourth, 7.5 points behind the Woking outfit.