Hamilton: It was a bit of a struggle through qualifying 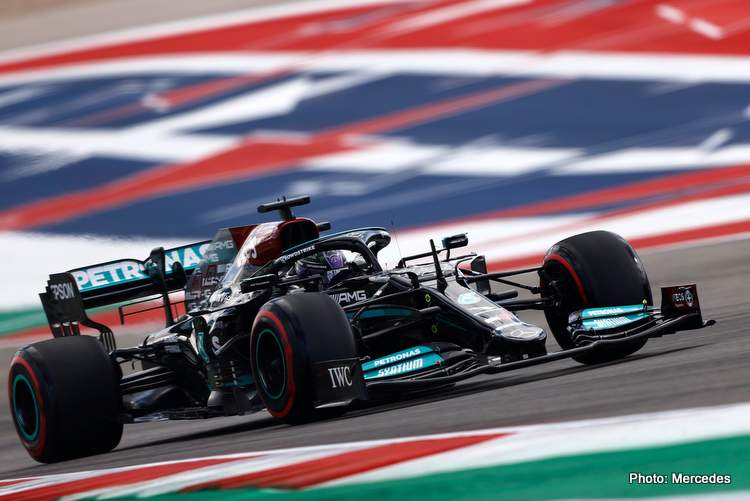 Qualifying for the 2021 Formula 1 United States, was undoubtedly a disappointing affair for Lewis Hamilton who had to settle for second admitting it was a bit of a struggle.

After starting the weekend in dominant fashion, Mercedes’ performance seemed to have gradually evaporated, as Red Bull slowly clawed in the pace deficit they had on Friday, to achieve a qualifying 1-3 courtesy of Max Verstappen and Sergio Perez respectively.

Hamilton simply had no answer, and while he extracted all he could out of his W12, the fact remains that he couldn’t deny his title rival pole on the day.

“I gave it everything today,” the Briton said in his team press release. “It was a bit of a struggle through qualifying, Red Bull were incredibly quick and from first practice onwards we seemed to fall back slightly in comparison.

“I was happy with how my last lap in Q3 turned out, of course there are always areas to improve but I think that was pretty much the maximum,” Hamilton explained.

“The crowd has been absolutely amazing here, so my mindset tomorrow is to win the race and give them all a great show.”

Despite the challenges he will face on race day, the seven-time F1 World Champion is till hopeful of a decent result.

“We’ll have to work as hard as we can, but we’re starting in a good position and I’ll give it my best into Turn 1 as there is an opportunity there,” he insisted.

However Hamilton is wary of the tyres’ performance, something he was vocal about during practice, he said: “Tyre wear is really aggressive here so it will be interesting to see what strategy we can do and that will present opportunities along the way, as well.

“So today wasn’t my favourite day but we can fight tomorrow,” the title contender concluded.

Valtteri Bottas, who had to take his sixth Internal Combustion Engine (ICE) of the season, was fourth in qualifying and will drop five places on the starting grid due to his latest ICE change.

“That wasn’t the result I was looking for today,” the disappointed Finn said in his team’s press review. “Red Bull definitely had the upper hand and seemed to make more of a step from yesterday.

“My first run in Q3 was OK, but the last sector didn’t feel great,” he went on. “And then I tried to have a clean lap on the second run, but the front locking and understeer was even worse. So, I lost some time and wasn’t able to improve.

The Alfa Romeo-bound driver is optimistic about his race prospects despite his grid penalty, and said: “I’ll be starting ninth because of the penalty but I think our race pace was strong, quite similar to Red Bull, and I’ll hopefully have a pace advantage to the cars directly ahead of me.

“Strategy will also be key tomorrow, so I’m sure we can move up the field and fight for good points. It’s a long race and I’m always optimistic,” Bottas concluded.

Needless to say, it is not an ideal situation for Lewis Hamilton, who previously declared that he would be targeting to win all the remaining races of the season with the ultimate goal of winning his record-breaking eighth drivers’ crown.

In light of Bottas’ latest ICE change, the reliability concerns surrounding Mercedes’ power units is another unsettling factor Hamilton has to deal with over the course of the remaining races.

However, the winner of 100 races is expected to be on full attack in Austin, a place where he has historically excelled, in an attempt to overcome his six-point deficit to Max Verstappen in the drivers’ standings.