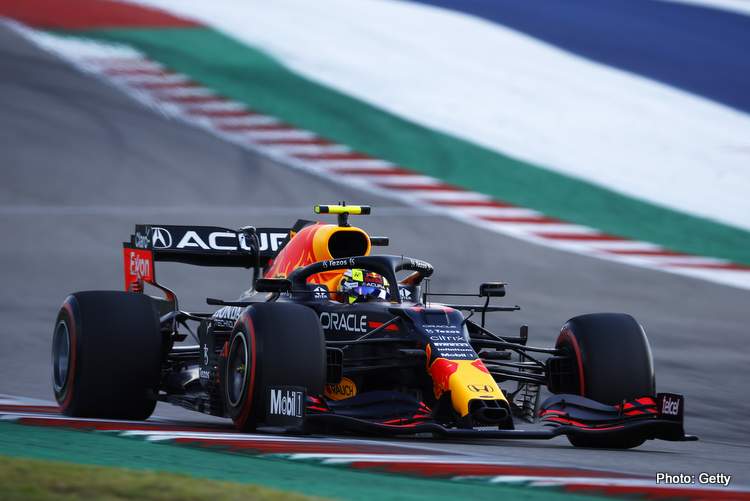 After a difficult Friday, Red Bull seem to have bounced back, as Sergio Perez continues his strong showing at Austin’s Circuit of the Americas and leads FP3.

The Mexican looked solid throughout the third practice session of the 2021  Formula 1 United States Grand Prix and ended up first with a time of 1:34.701 ahead of the impressive Carlos Sainz, only 0.104s off the pace of the Mexican.

However, Perez’s form should be taken with a pinch of salt, as the best efforts of Max Verstappen and Lewis Hamilton were deleted for exceeding track limits.

Verstappen’s deleted time was 1:34.383 compared to 1:34.458 by Hamilton, with a difference of 0.075s in the Dutchman’s favor, showing the close fight we should witness in qualifying.

Thus Verstappen was third as Hamilton settled for sixth.

Fourth place was occupied by Lando Norris, over two tenths down from the top time, and closely chased by Mercedes’ Valtteri Bottas a further 0.043s off the pace, the Finn having a moment at turn seven and flat spotting his tyres.

Daniel Ricciardo featured in the top ten in seventh place albeit four tenths off his teammate’s time.

Pierre Gasly was solid again for AlphaTauri in eighth position almost seven tenths off Perez’s time, and ahead of Ferrari’s Charles Leclerc who seemed out of sorts in this session, unable to put a decent lap together, and 0.987s off the pace.

Esteban Ocon rounded off the top ten a full second off the top time, compared to 17th for his veteran teammate Fernando Alonso, who will be joining Sebastian Vettel and George Russell at the back of the grid for taking a new power unit.

With the bumpy track surface and the stewards taking the track limits seriously, not to mention the negligible gap between Mercedes and Red Bull, the COTA will be putting up quite the show for qualifying. 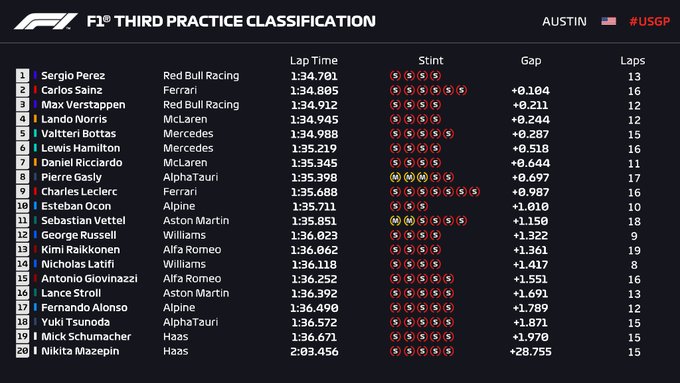