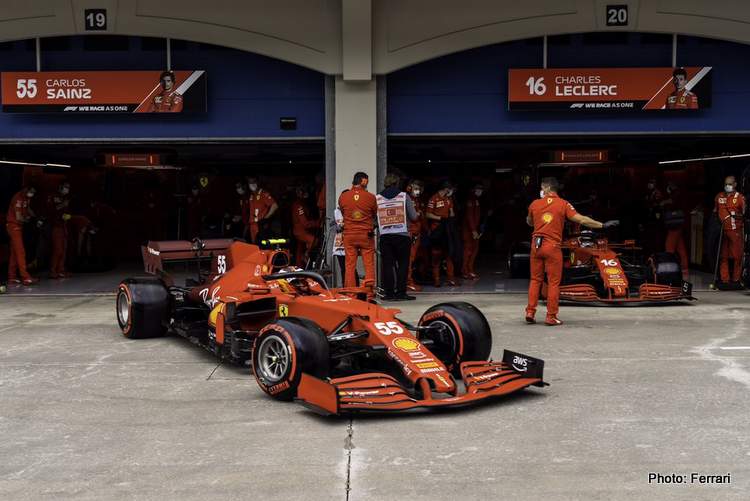 With Formula 1 landing in Austin, Texas for the 2021 United States Grand Prix, the bumpy track was a main talking point, but Carlos Sainz is ready to live with it.

The Spaniard is coming to the Circuit of the Americas on the back of two strong performances in Russia and Turkey, and was previewing the US Grand Prix this weekend with his team.

Sainz addressed the elephant in the room, the COTA’s bumpy surface: “Bumps within certain limits are part of the game, they make the track more difficult and enhance the driving skills, so I’m not saying I’m a supporter of bumpy tracks, but I’m ready to live with them.”

“We are ready to play with our direct rivals and I expect an open challenge, but we will have clearer ideas tomorrow,” he said of his team’s fight with McLaren for third in the constructors’ standings.

“I appreciate everything from the United States: food, cities and in recent years, since the Formula 1 TV series has existed, American fans have multiplied,” Sainz said touching on the “Drive to Survive” effect in attracting US fans.

“The fact that now I am racing for Ferrari has contributed even more to making me known,” the Spaniard said sensing the extra exposure he is getting.

“This is also why I am happy that next season we will have two races in this country,” Sainz concluded.

Charles Leclerc was a bit more wary of the bumpy track surface than his teammate, and said: “Seeing the MotoGP race a few weeks ago it seems that it will be a factor to be reckoned with.

“Tomorrow we will begin to realize the situation even if I must say that the last time we raced here the asphalt was far from smooth.”

The Monegasque aired his confidence in his team’s chances of fighting in the midfield.

“I think we will be able to fight for the top positions in the center group,” he said, “so on this season’s standards. Certain parts of the track should be more favorable to us, others, perhaps the straights, to McLaren.”

Leclerec’s flight to the US wasn’t straight forward, but that turned out to be a blessing in disguise as he was able to sample a bit of the American culture.

“I had a problem with my flight and I had to change my itinerary,” the Ferrari ace said, “so I was able to discover New York, which I had never seen and liked it very much.

“Austin also has a lot of charm anyway”, Leclerc added.

The Ferrari duo’s performance has elevated their team’s chances in securing third in the constructors’ standings, as they trail rivals McLaren by 7.5 points only. (Follow me on Twitter #MallakJad)