Häkkinen: Valtteri drove a perfect race, his best in F1 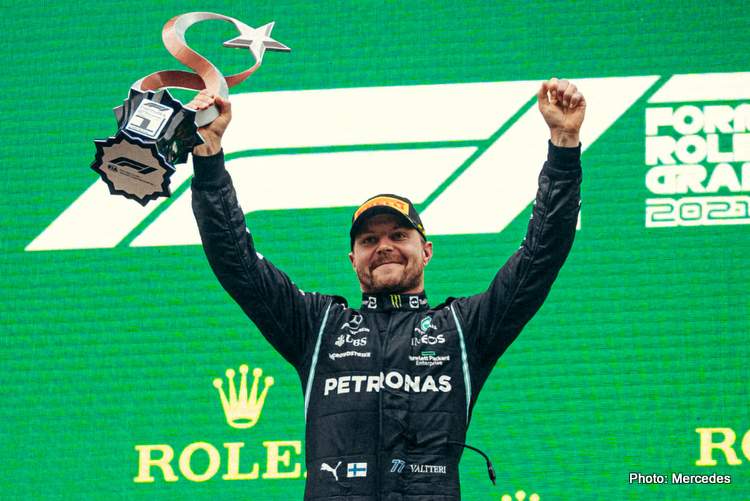 Bottas powered to a commanding victory at Istanbul Park on Sunday, his tenth in F1, after what a was flawless drive, winning by a comfortable 14.5 seconds.

Amid the focus on Hamilton versus Verstappen for the 2021 world championship title, this was an important victory for Bottas who only has six more races for Mercedes before he moves on to Alfa Romeo for the next chapter of his career.

Writing in his Unibet column, Häkkinen said: “That was a really brilliant performance from Valtteri Bottas on Sunday in Turkey. A very strong victory, his 10th in F1, and an important result because he scored the maximum possible points for Mercedes and kept Max behind.

“With teammate Lewis finishing fifth, it was critical that Valtteri prevented Max from scoring the win, so his domination of the race was great to see.

“Valtteri showed great skill in managing the intermediate tyres which were used throughout the race due to the damp conditions. Particularly at the start of the race and then again after his pit stop.

“It is so easy to destroy the grip levels on a set of intermediates by pushing too hard straight from the pits, which is what happened to both Lewis and Charles Leclerc later in the race. Valtteri just focused on beating Max off the start-line, protecting his tyres until they were ready to be pushed, and drove a perfect race.

“There is no doubt that this was one of his best victories in F1, so I am not surprised at how happy he and Mercedes were after the race. On a day when Lewis Hamilton had to take a 10 place grid penalty as the result of an engine change, Valtteri did everything that his team could hope for,” added Häkkinen.

Despite the top-notch drive, headlines belonged to his teammate Hamilton who started in P11, was up to third when the ‘to pit or not to pit’ furore blew up.

Mercedes did what common sense dictated, sacrificed a highly improbable (according to the computers) third place to bag fifth. The risk of pursuing a no-stopper, despite Hamilton’s eagerness to do so, is a blow out before the end which Pirelli had warned teams to avoid.

Häkkinen explained: “Lewis had a much more difficult race because of the critical timing of pit stops. The best moment to stop was around the time when Max pitted, and that’s precisely when Valtteri came in for a new set of intermediates too. Any other strategy felt like a risk, even if the car felt ok at that moment.

“While I can understand why Lewis decided to stay out and try to keep going until the end of the race, for sure the tyre performance would have dropped away.

“We saw that with Esteban Ocon’s Alpine, which never made a pit stop, and also with Charles Leclerc’s Ferrari which stayed out and led the race for nine laps. Ultimately Charles’ tyres were providing no grip, and that’s what would have happened to Lewis.

“He could also have suffered a tyre failure, and failing to finish is really not something that he can risk in his battle with Max for the World Championship. In my opinion finishing fifth, on a day when Valtteri won and Max had to settle for second, was a good result for Lewis,” added Häkkinen, a Grand Prix winner 20 times.