Norris: I have to be happy with seventh 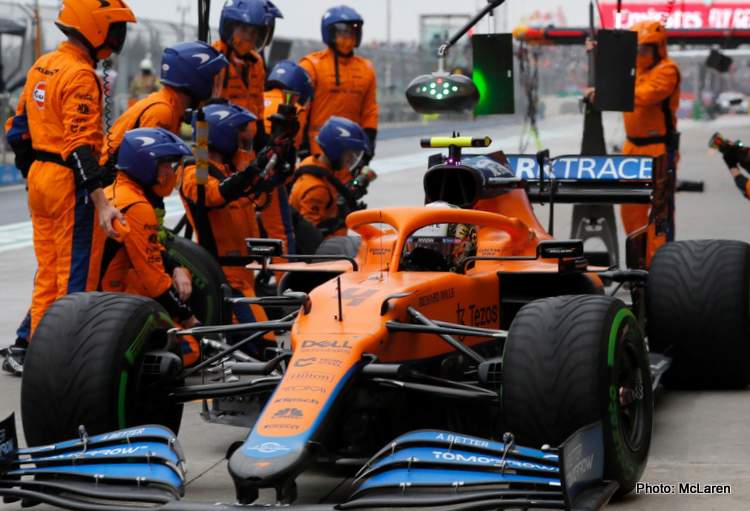 Lando Norris said he was happy to finish P7 at the 2021 Turkish Grand Prix. Looking to rebound from his last race in Sochi, the McLaren star could not achieve more on the day.

Norris would have been hoping for a better result at Istanbul Park, to recover from his nightmare of a race at Sochi, but the Papaya cars did not have the pace this weekend, and seventh was the best the young Briton could achieve on a race-long-wet Turkish afternoon.

Speaking in his team report after the race, Norris lamented a difficult day at the office.

“A very long and tough race today mainly because of the conditions,” he said. “It was very difficult to keep the Inters in a good window during the race, but I think we achieved everything we could in the end, so I have to be happy with P7.

“It was damage limitation for us at this track, but we came away with the best result that we could,” Norris admitted. “So, happy with that and we just need to make more improvements for the next one.

“It’s important we recover and keep pushing next time out!”, he insisted.

On the other side of the McLaren garage, Daniel Ricciardo had an even tougher time, failing to get out of Q1 on Saturday, and then spending his Sunday afternoon fighting off the pace at the wrong end of the grid.

“I think we had maybe four laps in the race where we had good pace but the rest was hard,” Ricciardo said in the Team’s race report. “In the beginning, we struggled a lot with front grip, so it was really hard to stay close to the others, and then we pitted for a new tyre.

“After that, I didn’t have great rear grip to start and was struggling but after a while it came good. We had probably four good laps in that stint where I could feel like I could really push on the tyre, which was what I was looking for. Of the entire race, that was the positive,” the Aussie claimed.

“I got a bit excited because I thought maybe it will just keep getting better and better, but it lasted four laps and then the rear dropped away again, so the last ten laps were a bit painful, just trying to hang on.

“Obviously, we were fighting for the points and that strategy was our best chance, but it was just really unpredictable. I know others went longer, with one going the entire race on one set, but at the end I saw my tyres and they were on their last legs.

“Unfortunately, it wasn’t a strong race but we’ll try to analyse it. On the positive side, we’ve got plenty of brisket to eat very soon. That makes me happy, bring on Austin!” Ricciardo said with his trademark sense of humour clearly intact despite his poor race.

McLaren team principal Andreas Seidl summed up his team’s Turkish weekend. He said: “We leave Istanbul with six more points in our Constructors’ Championship battle, after finishing P7 and P13.

“We achieved everything that was on the table for us today. With the pace we had all weekend and the picture unfortunately also not changing today in wet conditions, there wasn’t more we could do together with Lando and Daniel.

“Thanks to everyone here at the track, back home in the factory, our drivers and our colleagues at Mercedes HPP. Everyone worked very hard this weekend. On to the next one,” the German concluded.

The six points McLaren scored in Istanbul mean that – despite still holding third in the Formula 1 Constructors’ Standings – Ferrari is becoming more of a threat to usurp the Woking outfit with six races to go.