Hamilton: It isn’t true to say I’m furious with my team 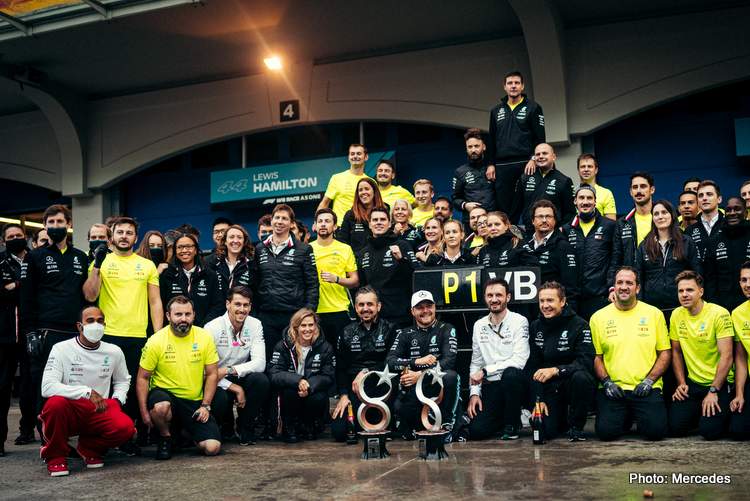 Lewis Hamilton moved to debunk claims that he is furious with his team, amid news in the press claiming that all is not good within the Mercedes camp after the 2021 Turkish Grand Prix tyre strategy disagreement.

When you are a seven-time Formula 1 World Champion, driving for Mercedes, and winning everything there is to win for over seven years now, you naturally find yourself in the spotlight, with every word you say or action you take, being put under the microscope and interpreted with different contexts, depending on the angle or intentions of the interpreter.

And that is exactly what happened with Hamilton after he finished the Turkish Grand Prix in fifth place, and didn’t bother to hide his frustration with his team not letting him follow his gut to finish the race on one set of Intermediate tyres, instead forcing him to pit with 8 laps to go, which meant he suffered a graining period on his new set of tyres with not enough time to recover from it.

A more relaxed Hamilton said on Instagram, on Monday: “Good morning World! I’ve seen some of the press this morning which has made a bit too much of the incident in yesterday’s race of when to pit.

“It isn’t true to say I’m furious with my team,” he insisted. “As a team, we work hard to build the best strategy possible but as the race progresses you have to make split decisions there are so many factors constantly changing. Yesterday we took the risk to stay out hoping it would dry, it didn’t.”

The Briton shed more light on the decision making process, he said: “I wanted to risk it and try and go to the end, but it was my call to stay out and it didn’t work. In the end, we did pit and it was the safest thing to do. We live and we learn. We win and we lose as a team.

“Don’t ever expect me to be all polite and calm on the radio when I’m racing, we are all very passionate and in the heat of the moment that passion can come out, as it does for all drivers,” as Hamilton clarified his intense radio exchange with his team.

“My heart and spirit are out there on the track, it’s the fire in me that’s got me this far but any angst is quickly forgotten and we talked it through, already looking ahead to the next race. Today’s another day to rise and as a team.”

And concluded with his famous expression: “Still we rise!”

While Hamilton might have presented an emotional clarification of what went down on this final Turkish laps, Mercedes’ track-side engineering director Andrew Shovlin offered his insights based on the data the team had at their disposal.

Shovlin started by acknowledging the great race executed by Valtteri Bottas, and said: “A superbly accomplished drive by Valtteri in the wet today, he had the race under control from start to finish and his fastest lap at the end shows just how much he had in reserve.

“The only awkward point of his race was giving up the lead to Charles in order to cover Max but that came back to him pretty quickly.”

Shovlin then touched on the Hamilton debacle, and explained: “Lewis had a busier afternoon – he’d made good progress considering there was no DRS to help and got himself up to fifth, almost passing PER for fourth.

“At that stage, most cars were stopping but we decided to leave Lewis out for the chance of either running to the end or transitioning to the dry tyre,” he continued. “It started to become clear to us that it was never going to be right for the slicks and our strategy tools were showing that we’d get beaten by PER and LEC anyway if we stayed out, so we took a fresh set of Inters to cut our losses.”

Despite the disappointment Hamilton vented, Shovlin saw the silver lining to the race result, and said: “We’ve extended our lead in the Constructor Standings and whilst we’ve lost a little ground in the Driver Championship, the car pace has been really encouraging here, both wet and dry.

“We’re looking forward to Austin where hopefully we can continue our current run of good form,” the director concluded.