Sainz: This was one of my best races 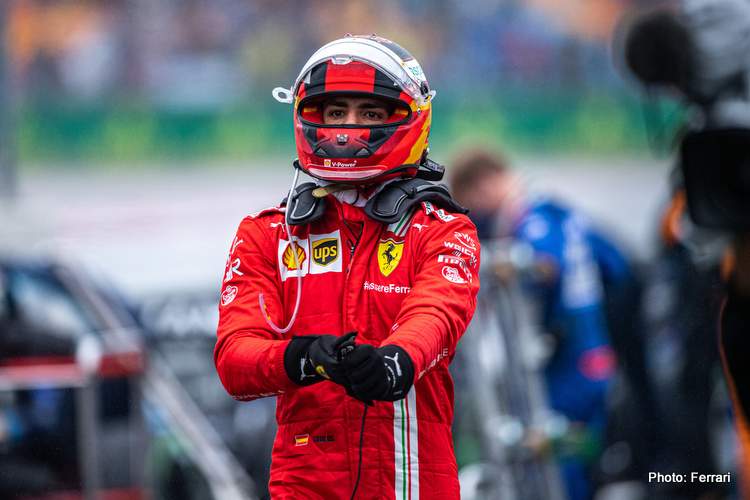 Carlos Sainz believes the 2021 Turkish Grand Prix was one of his best races, starting from the back of the grid after getting an engine penalty and finishing eighth.

Sainz was coming to Istanbul off the back of one of an impressive performance in the Russian Grand Prix where he achieved third position in mixed and tricky conditions.

His team gave him an upgraded power unit for the Turkish Grand Prix, which meant a grid penalty and a fight up through the field for the increasingly impressive Spaniard.

And fight he did, as he picked up the cars in front of him with some impressive overtaking and proper race craft, and despite his team making his life difficult with an eight-second pit-stop, Sainz was able to recover and finish in eighth place.

Sainz expressed his satisfaction with his performance in his team’s race report, he said: “This was one of my best races, and probably my strongest with Ferrari!

“That first stint in those tricky conditions was very intense but good fun. I overtook at different parts of the track and using all kinds of lines, so I really enjoyed myself.”

Sainz was clearly frustrated with his slow pitstop: “It was a pity we had a problem during the stop, because the pit stop itself was fast, but we need to analyse why it took so long to release the car.

“Instead of coming out behind Ocon I would have come out closer to Lando, and during the last ten laps I was one of the fastest on track, so I feel we could have finished the race further up. Anyway, these things can happen and I definitely have a lot of positives to take from today.

“I am starting to have a lot of fun with the car and to understand it better and better, so I look forward to the upcoming races and to keep building momentum,” concluded Sainz, who was able to make himself at home with the Scuderia in a short time.

His teammate Charles Leclerc did not have to deal with a grid penalty this time around, but put in an admirable performance qualifying fourth, and starting third after Lewis Hamilton’s grid penalty was applied. He was the leading car in the race for a number of laps and along with the team tried to finish the race on one set of tyres, which turned out to be over-ambitious. Fourth was the reward for his efforts.

“Overall it was a positive race,” Leclerc said in the team’s race review. “We were very competitive, especially in the first stint and the car felt good. We went long on the first set of Inters and once the rest of the field had stopped for the new set, we found ourselves to be quite a bit faster on the used ones.

“But after just a few laps, the other drivers started to clear the graining they were struggling with and found a lot of performance, so we knew we would have to stop too.

“We were a little out of step with the others on my stop that happened late in the race so we never got over the graining phase and couldn’t fight back. It’s a shame that we lost out on a podium finish, but the performance was there which is a positive,” the Monegasque lamented.

Both Scuderia drivers were racing without the watchful eyes of their team boss Mattia Binotto, who was back in Maranello working on the development of the car the pair will be driving in 2022. Binotto was following the race remotely and had his views on it.

“This was a very intense race and it confirmed the good signs that had already emerged in very different dry track conditions on Friday,” he said. “Istanbul is a very demanding track and we showed we were competitive, at least on this track and that’s why we can’t be entirely satisfied with the 16 points we picked up today.

“Charles had a great weekend, both in qualifying and the race. Together we tried to bring home an even better result and it’s a shame that in the end he didn’t make it to the podium, as that would have been well deserved.

“Carlos who came to Turkey with the grid penalty hanging over him, staged a great climb up the order, which took him all the way to eighth place.

“We continue to make progress but there’s still a lot of work to do to be regularly fighting for the win. We have to be realistic and continue to push to improve in every area.

“We can approach the remaining six races with confidence, in the knowledge that we have a package that allows us to fight right to the very end for third place in the Constructors’ championship, one of our stated aims for this season,” Binotto optimistically predicted.

Ferrari’s 16-point haul in Istanbul means that they are now trailing McLaren in the Formula 1 Constructors’ Championship by 7.5 points only.