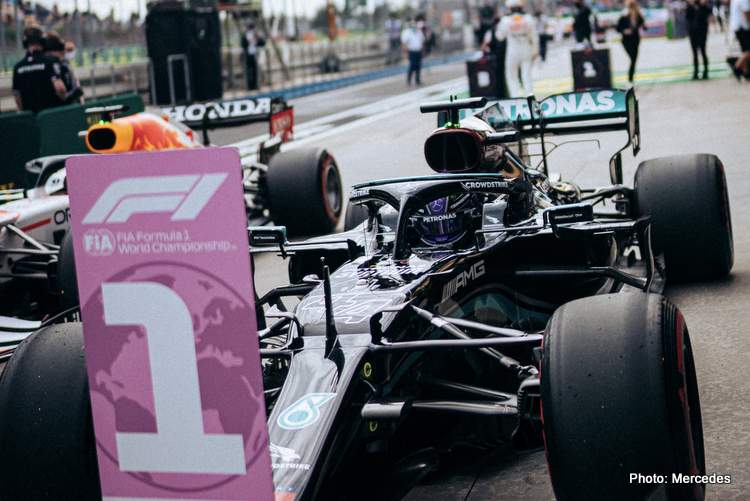 Formula 1 championship leader Lewis Hamilton and Mercedes are looking quicker at the Turkish Grand Prix than they have been all season, says Red Bull team boss Christian Horner.

Mercedes would have had a front-row lockout at Istanbul Park after Saturday’s qualifying, but for Hamilton collecting a 10 place grid penalty for an engine change that exceeded his allocation.

Instead teammate Valtteri Bottas will start from pole position with Red Bull’s Max Verstappen, two points adrift of Hamilton in the standings with seven races remaining, alongside on the front row.

“The Mercedes is hooked up around here, it’s working well on this asphalt and this circuit and he’s going to be coming through pretty quick. So we’ve just got to focus on our own race, get the strategy right, reliability, all those factors and see how we pan out.

“The guys have done a good recovery overnight. The whole engineering team trackside, and back in the factory in Milton Keynes have done a strong job today to make the progress that we have, so hopefully that puts us in better shape for tomorrow.

“The best route to beat Mercedes is to finish ahead of them. So we’re focused very much on our race, and trying to make sure we capitalise the maximum points of both drivers.

“Hopefully we’ll be closer to them in the race than we were in qualifying today, we see that they’re very quick over a single lap, whether that’s sustainable over the whole race, we’ll see,” added Horner

Hamilton won on a slippery surface in Turkey last year from sixth on the grid, with Verstappen starting second but finishing sixth.

Verstappen will start Sunday’s race on the ‘dirty’ side of the track, with less grip.

Asked whether he had the pace to beat the Mercedes, the driver’s answer was blunt: “No. But we will of course just try to follow and see what we can do and see what happens in the race in general.”

The Dutch 24-year-old started the previous race in Russia at the back due to a similar penalty, ending up second, and indicated Hamilton could not expect an easy passage from other drivers fighting for position and points.

“Some were fighting for their positions as well and then you get caught up in the fight they are in with other cars. Of course, they are also trying to race for their best result. I had a good time in Russia.” (Reporting by Alan Baldwin; Additional reporting by Agnes Carlier)