Hamilton: Frustrated in myself for not following my gut 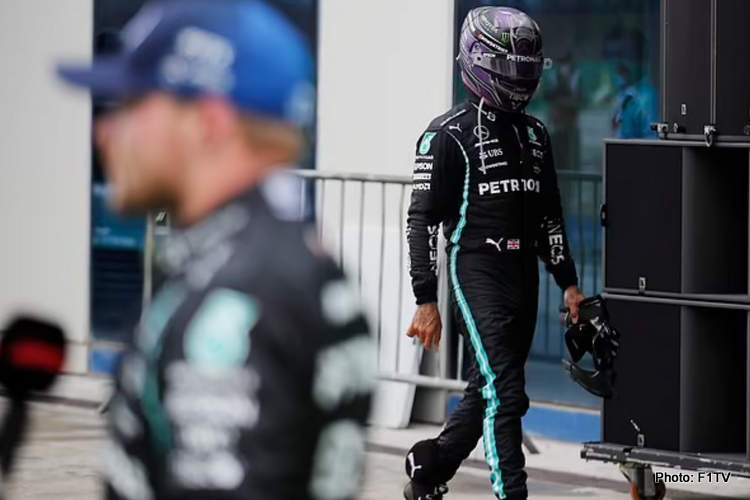 Lewis Hamilton was unhappy after finishing fifth at the 2021 Turkish Grand Prix, believing his team erred on the side of caution by opting not to gamble for third place with old tyres, but settle for fifth by pitting their driver late in the race.

During the second half of the Grand Prix at Istanbul Park, most drivers had pitted with the exception of Charles Leclerc and Hamilton who were first and fourth respectively. Ferrari blinked first and brought their ace in, gambling away a podium.

Mercedes faced the same predicament. The team called their driver in over the radio, but Hamilton was happy to stay out and he kept at it as around him, the fresh tyre drivers were getting progressively faster but not significantly. Hamilton was content to go for a no-stopper with ten to go.

But Merc also blinked and brought their driver in for fresh inters, and a possible podium went begging as the team, if anything, erred on the side of safety, believing fifth was the best for their man on the day.

Over the radio, after he emerged on track in fifth, Hamilton was angry, telling his engineer: “Fuck man, why did you give up that space?” and when next spoken to simply said: “Leave me alone.”

Immediately after the race, in the media pen Hamilton was still miffed: “I don’t have all the information but I feel we should have stayed out, my gut feeling was to stay out and that’s what I should’ve done.

“So, frustrated in myself for not following my gut, but I work as a team so I did the best I could with the advice I was getting.

“I didn’t know at the time [that I would lose two places] but I should have assumed. The tyres are bald so you don’t know how far they are going to go. I wasn’t that fast at the end there, I was struggling with low grip.

“I think probably in hindsight I should have stayed out or come in much earlier. With eight laps to go, I didn’t have time to go through the graining phase,” added Hamilton explaining the big drop in performance of the Inters during the heat cycle experienced on the day.

The result means Hamilton, who led Verstappen by two points ahead of today’s race now trails the Red Bull driver by six points with six races remaining in the 2021 Formula 1 World Championship.

With laps running out and running P5, Lewis Hamilton wonders about the wisdom of pitting for a new set of inters #TurkishGP 🇹🇷 #F1 pic.twitter.com/60FezdEXw7