Bottas: It was one of the best races I’ve had 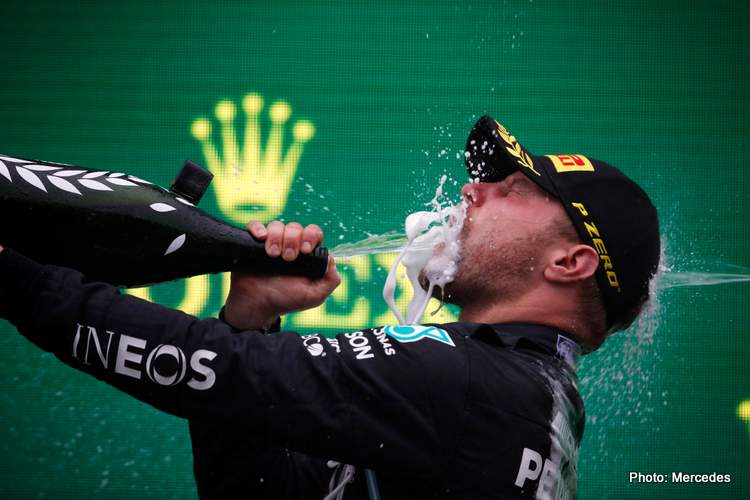 When Valtteri Bottas is good, he is very, very good as he showed with a commanding victory at the 2021 Turkish Grand Prix, his tenth in Formula 1 and perhaps his finest.

After inheriting pole from ten-place penalized teammate Lewis Hamilton a day earlier, Bottas blitzed off the line on Sunday with quicksilver reaction time, roared into Turn 1 ahead of the field where he remained until the flag waved a couple of hours later, never putting a foot wrong at Istanbul Park in very tricky conditions, requiring Pirelli intermediate tyres for both stints.

Speaking after his first victory since he triumphed in Russia last September, a beaming Bottas said: “It’s been a while but feels good. From my side, it was one of the best races I’ve had – ever. Apart from that one little slide I’ve had everything under control.

“The car was good in very condition, really good confidence in it. I’m glad everything went smooth for once for me. It was nice. When only one drying line, it doesn’t need much to go off. I definitely needed to focus all through the race. A difficult one, but feels like a well-earned victory.”

Last year the Finn finished 14th at the same race, spinning several times in one of his least memorable races in the top flight. But Sunday, it was quite the opposite.

Bottas explained: “The track luckily is quite grippy even in wet conditions, inter conditions, so it makes it a lot better than last year – it was like night and day here – and also in terms of my race, I had probably the worst race of my career here last year and now one of the best. So, a lot better…”

In the team report, he added: “When there’s only one drying line it doesn’t take much for you to go off, you need maximum focus all through the race and so today feels like a well-earned victory. My first win of the year too which feels great and I was happy to bring it home. It also took points off Red Bull so great for me and the team.”

Indeed a valuable victory for the team, while Hamilton battled from 11th on the grid to fifth, he saw his two-point F1 drivers’ championship lead turn into a six-point deficit to Red Bull’s Max Verstappen, but for Mercedes, thanks to Bottas’ victory, they extended their lead in the F1 constructors’ race to 36 points.

The Alfa Romeo bound driver lies third in the F1 championship with six rounds remaining in his stint as a Mercedes driver.

Had he been able to deliver stellar performances, as he did today at the Turkish Grand Prix, on a more regular basis he would not be departing Brackley for Hinwil.

A commanding drive from the Finn 💪#TurkishGP 🇹🇷 #F1 pic.twitter.com/6zYnpxyww5