Verstappen: I’m happy but I should be a bit better 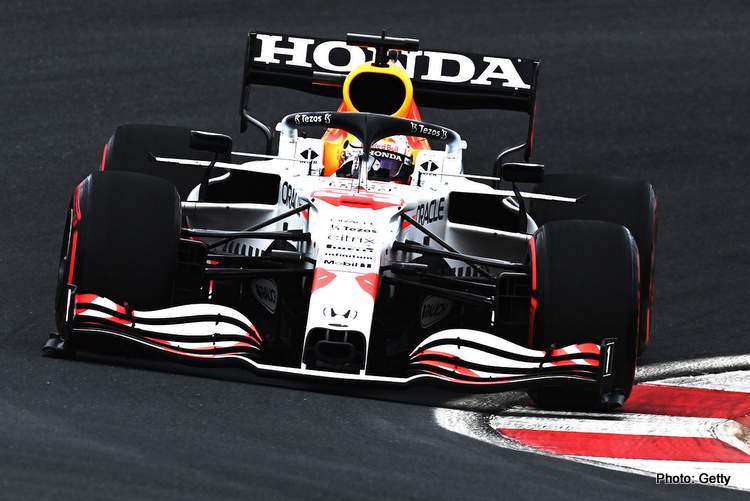 Max Verstappen declared himself happy after finishing third fastest in qualifying for the 2021 Turkish Grand Prix, but will start second as his title rival and fastest man in the session, Lewis Hamilton, drops down the grid ten places due to engine penalties.

Valtteri Bottas thus is promoted to top spot with Verstappen beside him on the front row. But in truth, Red Bull might have expected more as team boss Christian Horner expected the pendulum to swing his team’s way.

Nevertheless, Verstappen was content, and said afterwards: “Going off at the beginning was tricky with the conditions, but compared to yesterday we managed to turn it around quite well. The laps overall were quite good, even though the last one we lost a bit down the straight.

“Overall, it’s quite a decent recovery compared to yesterday. Tomorrow, lining up in second, let’s wait and see what the weather will do, but overall I’m pretty happy. I should be a bit better, let’s see how competitive we will be in the race. The tyre wear seems quite high around the track, but it’s quite fun to drive.”

In the team report, Max added: “I am of course happy with third and starting on the front row tomorrow. We improved a little bit from yesterday and the balance is a bit better but overall this weekend has been a bit more difficult.

“I hope for a clean getaway tomorrow but starting on the inside will be tricky, as there is very low grip in both dry and wet conditions compared to the outside, so we are expecting to lose out there slightly. We also need to consider the gap behind us, it’s much tighter than usual.

“We’ll aim to make the best of it and try everything we can tomorrow to keep the Mercedes behind but it’s not going to be easy, they’ve had great pace all weekend,” cautioned the Dutch ace, whose best effort 1.23.196s was three-tenths down on the top time.

Sergio Perez was half a second shy of his teammate in the sister car, but P7 will become P6 for the start tomorrow; he reported: “We are showing good progress and I think we should be able to continue that into race day. With the mixed conditions in Q1 we lost a set of new softs, meaning we only had one set for Q3.

“We did a banker lap on the used softs which was a decent time and then we didn’t manage to improve as much as we wanted to on the second run, which meant we didn’t get the lap time we were looking for.

“I am feeling positive and I am looking forward to trying to get through the grid and score some good points for the Team. It is a pretty long race around here, overtaking is possible and the tyre degradation will be pretty high out there, so there is everything to play for.

“I believe if we can get a good clean run into turn one then we will be looking good for the rest of the race and a podium could be possible. We are up for the challenge; we have good strategy and pace,” added the Mexican.

Horner, who might have expected more from his team in Turkey, took the positives out of the day: “The guys have made a good recovery overnight and fixed some issues we needed to work out.

“I think the whole engineering Team, both trackside and back at the factory in Milton Keynes, have done a great job to make the progress that we have, hopefully, that puts us in better shape for tomorrow.

“With Max qualifying in third but starting the race from second, it’s going to be vital he gets a good start and tries to get ahead of Bottas early on as Lewis has looked the quickest he’s been all year so far around here, so he’s going to be coming through pretty quickly.

“Checo’s times on the scrub tyre and the medium tyre were strong, it was just that last run on the new set of softs that didn’t come together. The strategy we’ve picked tomorrow for him should see him be able to make good progress.

“We think we can be closer to Mercedes tomorrow than we were in qualifying, so we’ve got to get our heads down, keep plugging away, get the strategy right and try to capitalise by getting the maximum points we can for both drivers,” he said.

Verstappen is two points down on Hamilton ahead of tomorrow’s 16th Round of the 2021 F1 World Championship, while Red Bull trail Mercedes by 33 points.

Loads of spins, a few shocks and a thrilling battle between the top three 🍿