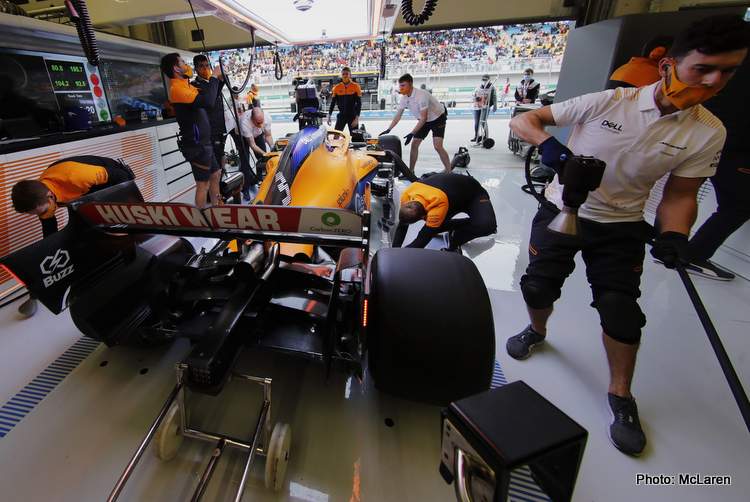 McLaren drivers were left lamenting a lack of pace after a below-par qualifying for Sunday’s Turkish Grand Prix; the high-flying team received a reality check today.

After the magnificence of the one-two at Monza, and Lando Norris’ stellar drive in Sochi two Sundays ago, expectations were high for the rejuvenated McLaren fans.

While it is hardly doom and gloom as the team remains very much on the up, eighth and 16th in qualifying are hardly inspiring.

Norris was again best of the pair. Eighth fastest means he starts seventh thanks to Lewis Hamilton’s engine penalty which means the fastest driver in qualifying drops ten places on the grid for tomorrow’s starts.

In the team report, Norris summed up: “A tough day with tricky conditions. We were just lacking pace today, so it was very tough to achieve a lot more than what we did.

“There was a slim possibility we could’ve got P7 but even [Sergio] Pérez was quite a bit quicker than us. Not the result we wanted, but I think it was the best result we could really achieve, so we’ll try again tomorrow and see if we can do better.”

Daniel Ricciardo’s yoyo form continued, the Australian failing to make it out of Q1 and struggling to match his teammate all weekend thus far.

He reported: “Obviously not where we want to be. The track was steadily drying and everyone just kept improving a chunk on that last lap.

“We didn’t make as big a step on that second set of Softs, and we’ve found it tricky with the Soft most of the weekend so it’s just unfortunate to be so far down the grid. We’ll find a way to come back tomorrow and try to understand the Soft tyre a bit better.

“It was probably also a bit of timing, we got quite a few yellow flags in Turn One which put us out of sync early. But I’ve already moved on from it, so now we’ll put our head down for the race tomorrow.”

McLaren team principal Andreas Seidl, who told all and sundry not to get too excited about the success because the journey to the top is still a long one, said of the team’s Saturday in Istanbul: “A challenging qualifying session for us today with a disappointing outcome, despite working hard overnight to unlock more performance from the car.

“We haven’t made a large step forward on performance and that meant we struggled for pace today – especially on the Soft tyres. That resulted in an early end to Daniel’s session, qualifying P16, and Lando, after getting through to Q3 on the Medium tyre, qualified P8 and will start P7.

“Tomorrow is another day, we’re expecting dry conditions and will work hard again this evening to see if we can unlock a little more performance in race trim, with the aim of moving both cars forwards,” concluded Seidl.

Ahead of tomorrow’s Round 16 of the 2021 Formula 1 World Championship, McLaren lead Ferrari in the constructors’ championship by 17.5 points while Norris, best of the two drivers, is fourth.