Verstappen: Lewis has a penalty but we focus on ourselves 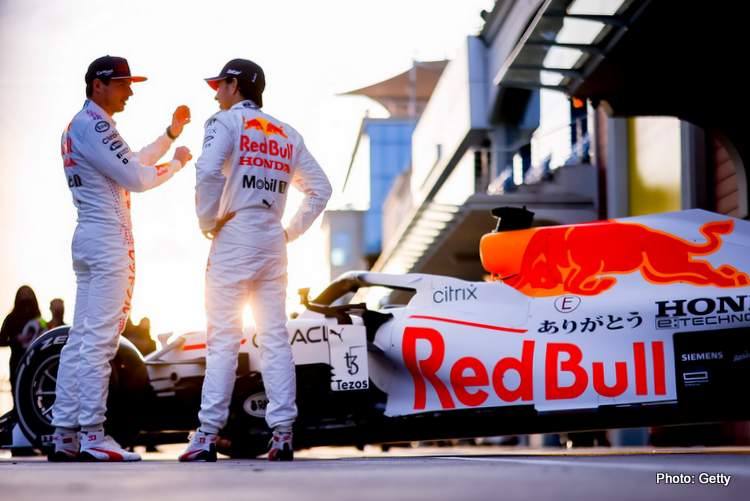 Max Verstappen and Red Bull have it all to do at the 2021 Turkish Grand Prix because it is a race they have to win in this title race of fine margins.

Have to because their archrival Lewis Hamilton won’t be starting in the top ten, no matter where he qualifies on Saturday because he faces a ten-place grid drop engine penalty. This automatically puts his rivals under pressure to maximise the advantage this presents.

Winning the race is the obvious target because Hamilton is more than likely to finish second with the package he has and of course the racecraft to match, much like Verstappen did at the Russian Grand Prix after his back of the grid start two weeks ago.

Granted those wacky last three laps helped his cause tremendously but that’s racing and, interestingly, rain is not off the radar over Istanbul Park this weekend.

The venue was expected to be a stronghold for Red Bull but, on the evidence of day one, the challengers have a great deal of work to do to close down the half-second gap to Mercedes. But it is still early days so no red light blinking in the pit garage of the energy drinks outfit.

Verstappen, who was second in FP1 and fifth in FP2, summed up his day: “It’s a super nice track especially with the improved conditions but it looks like we have a lot to go through this evening because today wasn’t the best of days.

“We tried a few different things going from FP1 to FP2 but we’re still looking around for improvements as we don’t have a lot of data on these cars for this track.

“Of course, Lewis is taking a penalty on Sunday but we have to focus on ourselves, hopefully we can make improvements before qualifying tomorrow as we have some challenges, we’ll see what we can do.

“I’m just looking forward to the rest of the weekend and getting back out there on track,” added the Dutch ace who trails his British rival by two points ahead of Round 16 in Turkey on Sunday.

Teammate Sergio Perez ended the day fastest of the pair with the fourth-best time, the Mexican getting up to speed on the opening day: “It has been a positive Friday overall and with the work we will do this evening we should be looking good for qualifying.

Last year Istanbul Park was incredibly slippery after it was resurfaced and took its toll during last year’s race – drivers complained – but ahead of this weekend, the track owners water-blasted the tarmac which has sliced an incredible ten seconds off of lap times.

Most drivers afterwards commented positively about the improved grip, and none complained!

Perez agreed with the majority: “The amount of grip surprised me today; it is more like a standard track out there now, but it is still very challenging because the grip is not consistent. Sometimes on the entrance to the corner, you have less grip than on the exit, so as a driver it is difficult to adjust to that aspect of this track.

As for their rivals, he said: “Mercedes look strong here but hopefully overnight we are able to chip away a couple of tenths and be in the mix for tomorrow.

“It is all about compromise because if you try and get the ideal balance for qualifying over one lap then you compromise the long run pace a bit, which is important here because overtaking is relatively easy.

“There is the potential of rain for qualifying tomorrow, but we will be well prepared, whatever the weather,” added Perez who lies fifth in the standings ahead of Round 16 this weekend.

The veteran will be expected to play the team game, first prize for the Blues would be a one-two on the day, and while his teammate is the hot favourite with Hamilton expected to be second, Perez could have a say on how it all pans out.

Finishing second to Max is why Sergio has been hired and his contract extended for another year. Time will tell if he will repay that faith starting on Sunday.