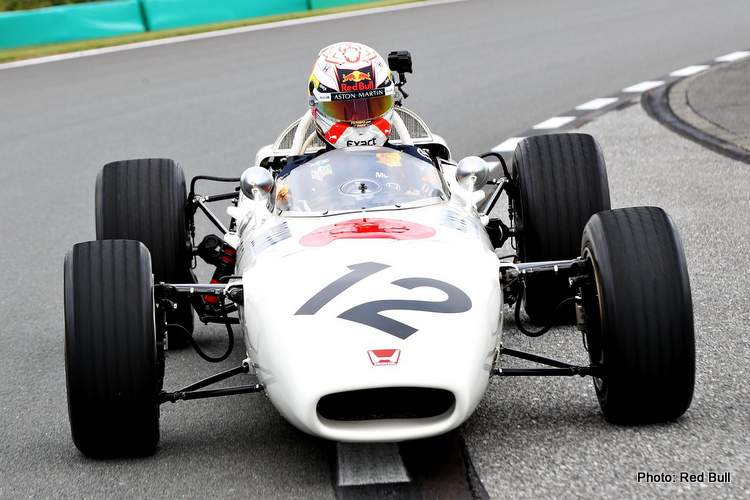 With the Turkish Grand Prix occupying the spot initially intended for the cancelled Japanese Grand Prix, Red Bull saw it fitting to celebrate Honda this weekend by launching a one-off livery on their car – inspired by the legendary RA272 – as a tribute to the Japanese manufacturer on its final season in top flight.

Red Bull ace Max Verstappen was speaking during a team Q&A session ahead of the race at Intercity Istanbul Park, where he admitted being disappointed not to race in Suzuka this year.

“I really enjoy the Japanese Grand Prix so it’s a shame that we will miss it,” he said. “I will miss the fans the most, it’s always a lot of fun seeing the fans in Japan as they are so passionate about Formula One. I also hope they like the new livery that we have on the car this weekend.”

Verstappen’s sentiments towards the Japanese Grand Prix were echoed by teammate Sergio Perez, who said: “I am very sad to not be racing in Japan this weekend, it was going to be something very special to race there with a Honda engine but instead we will be aiming to deliver the fans watching back in Japan, a great result this weekend, in their honour.”

Apparantly, Verstappen does not require a special livery to enjoy racing with Honda power, and seems intent on making the Turkish weekend a proper celebration of Honda’s F1 foray.

“It always feels special to race for Honda, even without the special livery,” he admitted. “For us as a Team and for Honda to miss out on the Japanese GP is a shame, but it’s cool that we can do something in Turkey instead to celebrate. I’m excited to see the it and it’s really special to have the car look different for a race so I’m looking forward to that.”

“My happiest memories with Honda are of course the wins, especially my first win with them, that was very emotional,” reflected Verstappen on his winning moments with Honda, and continued: “Working together with Honda has been such a pleasure and they are super motivated every single race and they are super passionate in terms of delivering the best they can all the time.

“So it has been really enjoyable working with them.”

Perez on the other hand, has worked with Honda for this season only but that was enough to leave a great impression on the Mexican who won in Baku this year with a Honda engine.

“I have been very impressed with Honda and I am very proud to be a part of such a historic brand,” he declared. “I love the Japanese culture and how the team at Honda work, the moment you speak to anyone there, they start working on your ideas straight away. They are an inspiring organisation to work alongside.”

With last year’s Turkish race being far from successful for Red Bull, their title contender is hopeful of a better showing this time around.

“Last year’s Turkish GP was of course not the best weekend for us as a Team,” the Dutchman admitted. “But I think it will be quite different circumstances this year, hopefully the tarmac will be a bit more grippy.

“I think it will be quite a new weekend in general for everyone, there will be a lot to learn so I’m looking forward to seeing how competitive we are there,” he concluded as he eyes to retake the lead of the F1 drivers’ standings after losing out to Lewis Hamilton in the Russian Grand Prix.

Verstappen lies second in the drivers’ standings, 2 points behind Hamilton, and will be looking to regain the momentum in the title fight with a strong performance in Turkey in his 54th race with Honda power.