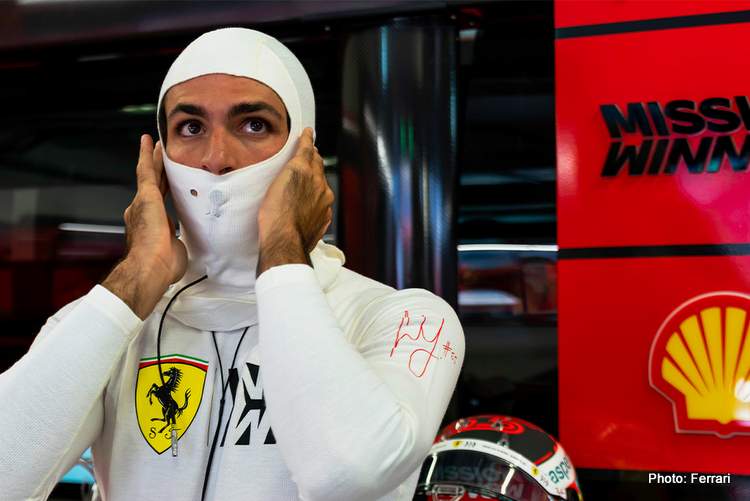 Carlos Sainz will finally get a taste of Ferrari’s new power unit during the 2021 Turkish Grand Prix.

The Spaniard, who has had an impressive debut season in red, heads to Turkey on a high after securing third place in the Russian Grand Prix despite using an old specification Ferrari power unit, as the upgraded unit was bolted to Charles Leclerc’s SF21.

Sainz did not have to wait long to sample the new Ferrari power mill, as his team announced in a statement previewing the Turkish Grand Prix, that number 55 Ferrari will be powered by a new and upgraded power unit, and receive the consequent grid penalty.

“As was the case for Charles Leclerc in Russia, in Turkey Carlos Sainz will take a completely new power unit fitted with the new hybrid system,” the team statement said.

“Therefore he will start from the back of the grid with the aim of climbing up the order to try and score some points,” the statement concluded.

This means that Ferrari team principal Mattia Binotto has delivered on his promise to Sainz to get the new PU as soon as possible.

However, Binotto will not be in Istanbul Park this weekend, as confirmed by the team statement as well.

“Mattia Binotto will not attend the Turkish Grand Prix,” the statement confirmed, “but as was the case several times last year, the Team Principal will be based in the Maranello factory to focus on development of next year’s car.

“He will of course follow all sessions and the race from the Remote Garage, with a permanent link to the team at Istanbul Park.”

With Ferrari announcing several time that their major focus will be on next year’s car, which they are pinning all their hopes on to bring them back to their winning ways, Binotto’s decision to skip Turkey seems in line with that strategy.

Ferrari are currently fourth in the Formula 1 Constructors’ Championship, 17.5 points behind McLaren, their biggest threat for third in the standings.

/ #Tifosi, we’re off to Istanbul this weekend for the #TurkishGP https://t.co/jUbUTxYnTw