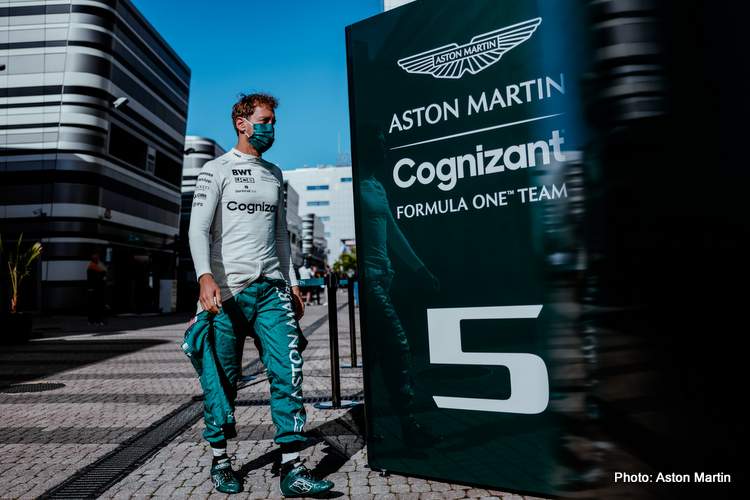 Aston Martin’s Sebastian Vettel is looking forward to the upcoming 2021 Turkish Grand Prix hoping to repeat his 2020 performance there, but in Green this time.

The four-time F1 champion has recently extended his contract with Aston Martin for one more year, after speculation that he might be considering to call it a day on his impressive career in top flight. However, Vettel still seems to have the passion for F1 racing, and 2022 will be his 16th as a grand prix driver.

Previewing the Turkish Grand Prix with his Aston Martin team, Vettel hopes to have a repeat of his performance last year with Ferrari, where he achieved a strong third place after starting 11th on the grid in mixed conditions.

“One of the most rewarding challenges at Istanbul Park is trying to take Turn Eight flat,” he said. “It’s a 260km/h corner, with plenty of bumps, and a blind entry – so it’s always fun.

“I really enjoyed my race in Turkey last year, and I’ll be pushing to fight strongly in the midfield once again this weekend,” vowed the German.

His teammate Lance Stroll, has also had some nice memories from last year’s race at Intercity Istanbul Park, where he achieved his first ever pole position during a wet qualifying session. His race was not as spectacular as he didn’t have the pace in drying conditions and ended up ninth.

Nevertheless, Turkey 2020 remains memorable for the Canadian, he said: “My first experience of Turkey last year gave me one of the best moments of my career when I took pole position before leading laps on Sunday.

“Those experiences showcased how challenging the track can be. Grip can be difficult to find, but that makes for a constant challenge. I’m looking forward to getting back out there and aiming for points,” he concluded.

The team will be looking to get some decent haul of points in Turkey, hoping that their drivers will not have another run-in on track as in Italy and Russia.

Aston Martin have had an underwhelming season, which they blame on this year’s new floor aero regulations. They are currently seventh in the constructors’ standings.