Vasseur: The situation is an opportunity for Antonio 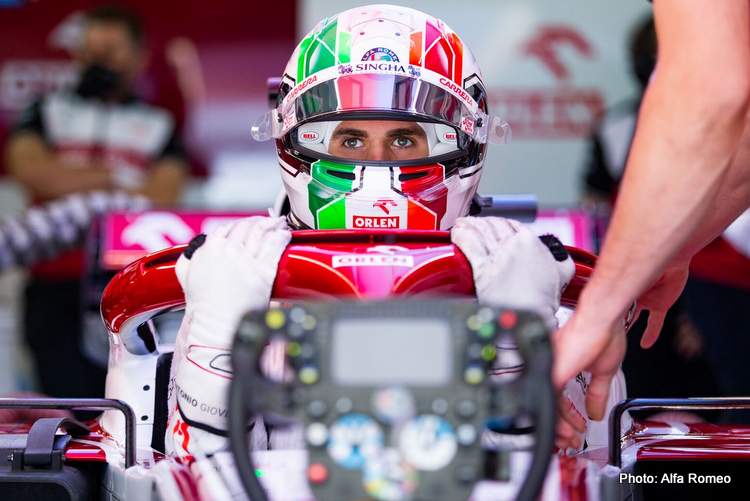 Alfa Romeo team principal Frederic Vasseur insists all is not over yet for Antonio Giovinazzi, as he insists the under-pressure driver can still turn his fortunes around.

That Giovinazzi’s seat at Alfa Romeo is under threat is not a hidden fact anymore, as the pressure mounts on the Ferrari-backed driver to perform in order to keep his seat. Giovinazzi has not set the world alight during his three-year stint with the team having an aging Kimi Räikkönen as a yardstick.

With Valtteri Bottas confirmed as a replacement for the retirement-bound Räikkönen, the other Alfa Romeo seat is still up for grabs with many candidates vying to drive for the Hinwil based outfit. Toto Wolff has previously expressed interest in securing a seat for Nyck de Vries – this year’s Formula E champion for Mercedes – in F1 with only the Alfa Romeo seat an option now after Alexander Albon secured a drive for Williams, a seat Wolff was previously targeting for de Vries.

ART driver Theo Pouchaire, currently fifth in the F2 drivers’ standings, is naturally linked to the seat as well being a Sauber junior driver, while Chinese F2 driver Guanyu Zhou also emerging as a candidate for the seat.

However, speaking to Racer, Vasseur believes that Giovinazzi can still retain his seat for 2022, provided he gets his act together and improves his performance as this season rolls towards its final phase.

“In terms of pure performance, we have to speak about qualifying and the race,” Vasseur said. “Last year he did very strong races and was the best performing first-lap racer, so he did very well last year in the race.

“This season he’s struggling a little bit when he had to improve in qualifying after Q1. He did very well in the last few events, and I was very happy to see that he could deliver and could do a step over the different stints and runs. He was improving from Q1 to Q2 and Q2 to Q3 every single run, and he was able to put everything together and fine-tune during the qualifying.”

Vasseur made his expectations of his driver clear: “For sure, now the target is to score points, and the last few events were a bit difficult. But I know he’s able to do the job and now I’m waiting for the weekend when he puts everything together – qualifying pace, race pace and then from the first lap to the last lap.”

With Alfa Romeo being the only team with a vacant seat, Vasseur feels that the team is in a strong position having the luxury of choice.

“I think at least the good side of our position is that we can wait because we know we have some drivers in contact and the ball is in our hands,” he said. “It’s also the opportunity for Antonio to show that he can improve.

“I’m considering the situation as an opportunity for Antonio, because he’s the guy in the car who can show that he can do a good job and can improve. It’s much more frustrating when you’re not in the car and you have to wait to see if the others are doing well or badly.

“Antonio has this opportunity, and he has to take it,” concluded the Frenchman, urging his charge to grab the chance given to him.

Giovinazzi currently lies 18th in this year’s F1 Drivers’ Championship, with 10th place in Monaco being his best result and only point-scoring finish this season. He will be taking part in his 56th race in top flight at the upcoming Turkish Grand Prix.