Binotto: More important to be Ferrari than winning 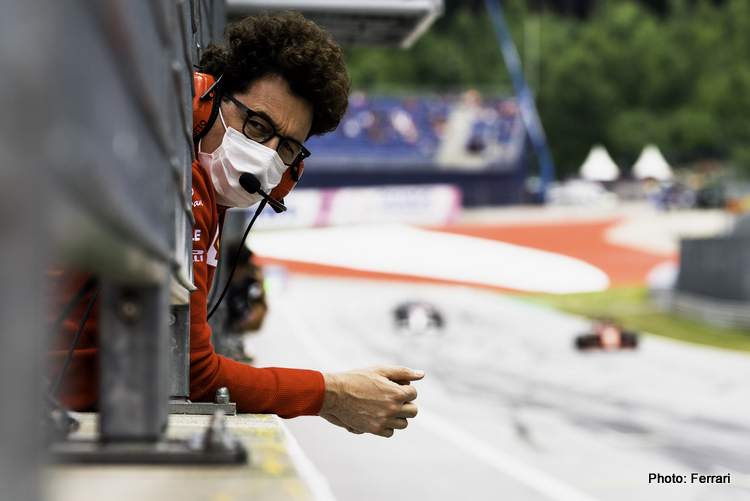 Mattia Binotto must have a guardian angel on his shoulder, able to keep his job as Ferrari team principal amid dismal times at Maranello which, in the past, has had a revolving door for underdelivering bosses.

But times have changed, obviously, as Binotto remains in his post talking up the future and explaining why “being Ferrari” is more important than winning for the team under his captaincy.

After Stefano Domenicali departed the Ferrari revolving-door in 2014, Marco Mattiacci entered for a season before being replaced by unpopular and brash Maurizio Arrivabene, who was comparatively far more effective as team manager than Binotto but was dismissed (by the late Sergio Marchionne) at the end of 2018, as the team made a choice between the pair.

Since Binotto’s promotion to the helm in 2019, Ferrari has won thrice (with a questionable engine) and scored 25 podiums, during almost a similar period under Arrivabene the Scuderia won 13 times and 88 podiums.

However, this seems not to matter to the invisible powers above Binotto’s head and the man himself, as long as they are Ferrari… Yes, do things the Ferrari way, which is not all about winning according to the engineer turned team boss.

In an interview with The Guardian, Binotto explained his philosophy: “To identify ourselves. It is something unique, it is Ferrari, it includes all our values and everyone working at Ferrari. It’s most important that we understand it’s a unique family, a unique thing.

“I use the example of Gilles Villeneuve as being a fantastic driver but actually he really won very little. The way he was behaving, the way he was driving, his passion made the difference,” recalled Binotto of the Ferrari legend, admired for his spirit and tenacity no matter what contraption they gave him to drive.

Alas, the great Gilles was killed in qualifying for the Belgian Grand Prix, in the wake of a nasty feud generated by Didier Pironi ignoring team orders a couple of weeks earlier to steal victory from his teammate Villeneuve at the San Marino Grand Prix at Imola, ignoring a team order to hold station.

Ironically Binotto brings up an example of atrocious driver management by the bosses of Ferrari at the time.

Nevertheless, the spirit of Villeneuve lives forever in the hearts of Tifosi for his bravery and his no-compromise driving style.  The essence of that spirit is clearly more important for Binotto than actually delivering the big silverware to the trophy room at #4 Via Abetone Inferiore.

Historically when things do not go well for the sport’s most successful team on track, it gets pretty hectic off it as the blame game goes into full swing, and that revolving door becomes busy, not only for team principals but also the fall guys forced to walk the plank of culpability.

That culture is changing insists Binotto: “It’s not by sacking people that you make a car go faster.”

And added: “It’s something on which we have worked very hard and we are still working very hard because it is the worst that may happen. If you fear being blamed you are not progressing so it is something, a behaviour, a culture, we are trying to address.

“At times of such difficulties in 2020 the team being united, no blame internally, no criticism but working together trying to react was something I was very happy with,” he said, in reference to one of the worst seasons in the great team’s illustrious history.

The most glorious of which was the incredible succession of titles won by Ferrari during the Jean Todt era, with Michael Schumacher delivering legendary results for the team, so many wins and so many titles too. However, it did take five years for the Dream Team to make it happen.

But Binotto, who was a Test Engine Engineer for the Scuderia at the time, has deja vu: “There are similarities with now. It was a long time since Ferrari had won in 1995 and Jean Todt was building the foundations for the future to set up a winning cycle, employing young engineers. Twenty-five years later we are in a similar position.”

“I have been lucky to work with these guys, Jean Todt, Michael Schumacher, who was a leader not only in the car but outside the cockpit, Ross Brawn, Stefano Domenicali… There were plenty of people at the time setting really good examples which are very useful to me today.”

For now, those examples have not served Binotto too well at all yet he can rest assured he will keep his job despite not winning, as long as they do it the Ferrari way, namely drive a very bad F1 car until all the bits fall off it, including a wheel or two, Gilles style and leave the winning to Mercedes, Red Bull and others.