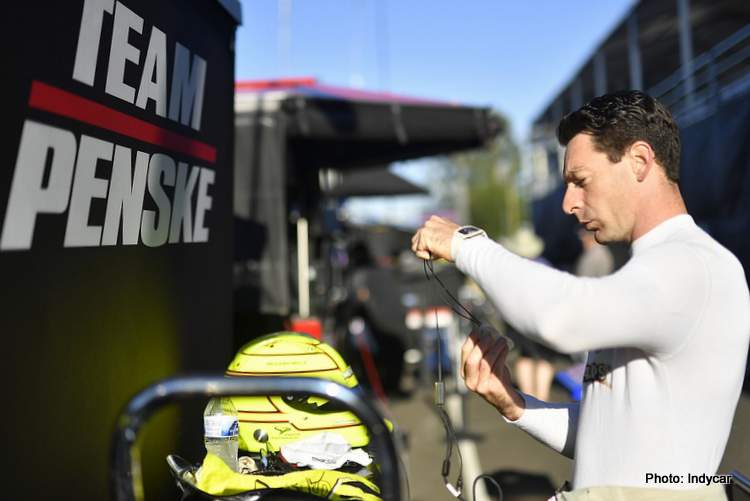 Simon Pagenaud shared a quiet moment with his wife and infant son before his final ride of the season to reflect on his time with Team Penske.

An IndyCar championship. The Indianapolis 500 among his 11 wins. Seven seasons driving for Roger Penske.

And yet Pagenaud was climbing into his car for the last time. He finished fifth in the IndyCar finale, said goodbye to his crew and walked through the garage with his arm wrapped around his wife’s waist as she carried their headphone-wearing newborn, Marley.

He was the second driver this season to walk away from Team Penske.

Pagenaud on Monday was named driver of the No. 60 for Meyer Shank Racing, where he will reunite with former Penske teammate Helio Castroneves to drive for this year’s Indy 500 winning organization. He joins Brad Keselowski from the NASCAR team in the rare club of Penske drivers who leave of their own accord.

Keselowski wanted an ownership stake, something Penske couldn’t offer so he looked elsewhere despite the option to extend his contract. Pagenaud also could have stayed, and maybe he would have if Penske wasn’t in the process of returning to IMSA sportscar racing in 2023.

The last time Penske rebuilt its sports car program it cost Castroneves his job in IndyCar. Penske moved the Brazilian in 2018 to IMSA as a key part of that program, and although he still ran the Indy 500, when the sports car team closed three seasons later he had no ride at all. That came just after Castroneves had won his first series championship after two decades of driving for The Captain.

Pagenaud was likely headed toward that same path if he returned to Penske. But like Castroneves, he wants to be in IndyCar. Castroneves returned this season in a six-race deal with Meyer Shank that catapulted him to his record-tying fourth Indy 500 victory and an expanded full-time second car next season.

When Castroneves won the 500 in May, that looked pretty darn good to Pagenaud. He was already talking to just about every team in the paddock but the opportunity with MSR didn’t arise until Jack Harvey made the surprise decision to leave the team he’d helped build.

Ironically, Pagenaud will probably still end up driving a sports car. Shank has one of the top teams in IMSA and Pagenaud would be the obvious choice for an expanded Rolex 24 lineup, but more important, the chance to run the 24 Hours of Le Mans.

“My time driving for Team Penske was incredible but that’s come to an end now and this really seemed to be the best fit for me. I enjoy working with Helio, we work together very well, and I have seen Meyer Shank really grow.

“Even before Helio won Indy I could see that Jack Harvey was running very well and that team was really making great progress. And then when Helio won, it showed the capabilities of the team. It’s very exciting to be able to be part of this now.”

MSR started in 2017 with Harvey and three races, steadily built its program each year and next season will field two cars with a lineup that now boasts an IndyCar championship, five Indy 500 wins and 46 victories.

Harvey has not said where he’s going but it’s widely believed to be Rahal Letterman Lanigan, which hasn’t named two of its three drivers for next season. Oliver Askew ran the final three races for what will be a fulltime entry next year for a driver who has yet to be identified, and it’s unclear if two-time Indianapolis 500 winner Takuma Sato will return or possibly replace Romain Grosjean at Dale Coyne Racing.

There’s a lot more movement expected, with Ryan Hunter-Reay available and the status of several other veterans undetermined. There’s a crop of young drivers waiting for promotion from Indy Lights, and this IndyCar season proved to be a true changing of the guard.

The youth movement hit with Alex Palou at 24 the oldest of four young, new winners. Palou won the season-opening race and led the season standings 12 of 16 weeks to become the first Spaniard to win an IndyCar title and its youngest champion since 2003.

Pagenaud isn’t exactly old at 37 but there are just over two dozen IndyCar rides, he doesn’t bring sponsorship and expects to be paid. When the No. 60 became an option, the excitement of what Shank has been able to build put the team atop Pagenaud’s list.

The change will likely suit him quite well.

Not everyone wants to be Penske perfect every day — Pagenaud told AP he looked forward to not shaving every morning in his new job — and this season was the worst of his IndyCar career. His two podiums and 12 laps led were both career lows, and he finished a distant eighth in the standings in his first winless season since 2018.

The move to Meyer Shank puts Pagenaud into a much smaller, family-run organization but alongside his former teammate in what will be a monster lineup that will be expected to deliver wins.

“I believe I’ve got a lot of racing ahead of me, a lot of wins and I can compete for championships. This team is going to be very capable of doing that, so this is a very exciting time for me. I feel very fortunate to have this opportunity,” Pagenaud added. (Report by Jenna Fryer)

Love you, all. It’s been a great journey, my friends. The best one. I’ll always remember crossing the start finish at Indy! https://t.co/SYWMFT9Lhc