Leclerc: I feel like I could have done a better job 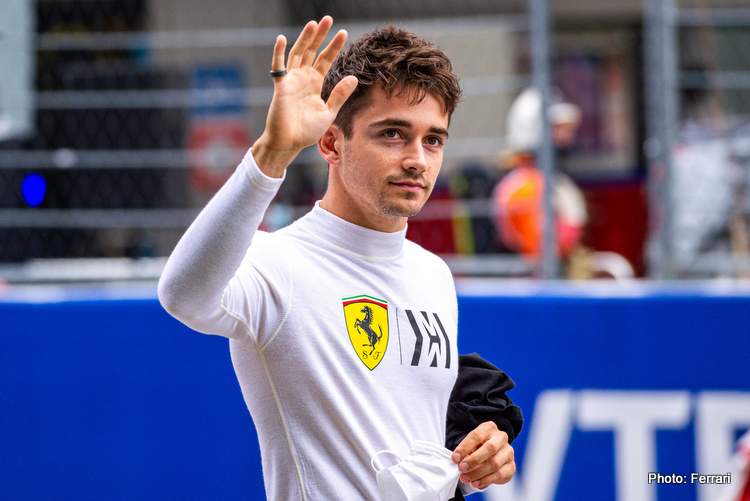 But then the rain came down to ruin his Sunday on a day the Ferrari driver felt he could have done better under the circumstances.

A new engine at Sochi Autodrom for Round 15 of the 2021 F1 world championship race meant grid penalties and a back row start from when he blitzed to 12th on the opening lap to run as high as third halfway through the 53 lap race.

At one stage late in the race, a podium was very much on the cards for a hard-charging Leclerc but then the ‘weather gods’ had their say and changed his script dramatically: “It started to rain quite a bit at one point, and we were very competitive in those conditions. The third sector was dry, so what we were losing in the first and second with a bit of rain we were gaining in the last one, so I decided to stay out.

“There was one lap where I doubted, but there was Carlos who was in front of me who was meant to stop that lap. I couldn’t stop at the same time. The lap after was already too late so, at that point, I knew my race was compromised, so I tried to stay on slicks hoping the rain decreased but it didn’t happen.

“I’m very disappointed with a race like this as the first part was looking extremely good. To finish 15th like this hurts. I will analyse after this weekend to know what I could have done better… because I feel like I could have done a better job as a driver to help the team take the right decision and that’s it.

“Obviously before that, it was a very, very positive race on my side, so it disappoints me even more to finish it that way. But it’s the way it is now, and I will try to learn from it,” added Leclerc whose teammate Carlos Sainz enjoyed better fortune thanks to a better call and finished third for the Reds.

Much like Charles, also damned by the rain was pole winner and race leader, was Lando Norris who looked set for his first F1 victory after a stellar drive on the day, fending off (with apparent ease he reported) the eventual race winner – Lewis Hamilton – until, of course, the skies unloaded over Sochi.

Excuse the pun, but in the same boat as Norris, Leclerc empathised with his McLaren rival: “Probably he’s part of the decision process in those type of situations, and he might feel very, very guilty. But he is an amazing driver. I think he has shown it very often.

“He has had a very strong season, and I am sure he will learn from it. It’s just a matter of time before his first win, so yeah, I don’t think he should feel so down after the race he did,” said Leclerc, who lies seventh in the championship standings after 15 rounds 8.5 points down on teammate Sainz.

And there is Charles and Seb going wheel-to-wheel at Sochi 👀🍿#RussianGP #F1 pic.twitter.com/oOGqescc0B