Verstappen: We will definitely take that result 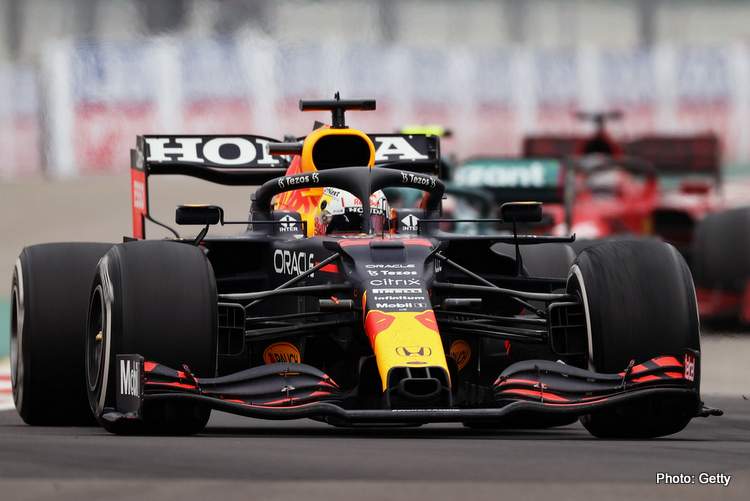 Max Verstappen was targeting damage limitation at the 2021 Russian Grand, courtesy of his engine related grid penalty. He did just that with his second place, but it was in no way easy.

Despite his bleak prospects up until the rain hit the Sochi Autodrom track, an inspired decision by the Red Bull pit wall with a timely switch onto intermediate tyres saw Verstappen finish the race in second place behind title rival Lewis Hamilton, who won his 100th race.

Verstappen leaves Russia trailing Hamilton by two points in the drivers’ standings, but he will get consolation by the fact that he has taken the extra power unit he needed to, and that Hamilton is bound to follow suit at some point in the season. So that’s one headache out of the way for the Dutchman whose team performed a strategic masterstroke, albeit with the help of some unpredictable Russian weather.

Verstappen expressed his joy with his result during his team’s press release, he said: “Wow, we will definitely take that result! Of course to come from last to second is very good and when I woke up this morning I definitely didn’t expect this result.

“To finish where we did with the penalty we had, we didn’t lose as many points as we could have so as a Team we did a really good job. It was a crucial call to change to the inters, it was really slippery on track and we made a great decision with the timing and took the right lap to pit.”

“A lot of things can happen when you’re starting from the back of the grid, especially on the first lap when other cars are fighting each other, but we stayed out of trouble, kept it clean, and managed our race very well.

“The race itself was not very easy, it was difficult to pass other cars and once you got stuck it was easy to damage your tyres but luckily in the end the rain helped us make the last jump in positions,” concluded a Verstappen clearly grateful for mother nature’s helping hand in his second place.

On the other hand his teammate Sergio Perez was expected to put pressure on Hamilton at the front, and buy his teammate some time as he fought his way from the back. Despite not being able to bother the Mercedes man a lot, Perez was shooting for a podium finish, but a late call to change his tyres into intermediates when the rain started meant he had to settle for ninth.

“We were on for a podium today so I decided to take the risk in staying out on the slicks instead of pitting for inters,” said a disappointed Perez. “In the first and third sector it was pretty dry and you could get temperature into the tyres, so if it then dried up those of us on the slicks would have made it work and those on the inters would have seen their race destroyed.

“In hindsight the slick wasn’t the right tyre and ultimately the timing of the rain in the race meant some people got lucky today and others didn’t. We were on for a great result with a podium through pure merit and despite a slow pit stop we still managed to come through the field to third but sometimes this is how racing is.

Perez then reflected on his slow pitstop: “The issue with the stop wasn’t a human error and I spoke with my pit crew after the race to check they were okay because we’re obviously all disappointed.

“As a Team we still walk away with a lot of points today and yes, it is frustrating for me, but I feel like I got so much out of the car which is only promising going to Turkey in two weeks’ time,” concluded an optimistic Perez looking ahead for the next race.