Sainz: I gave absolutely everything 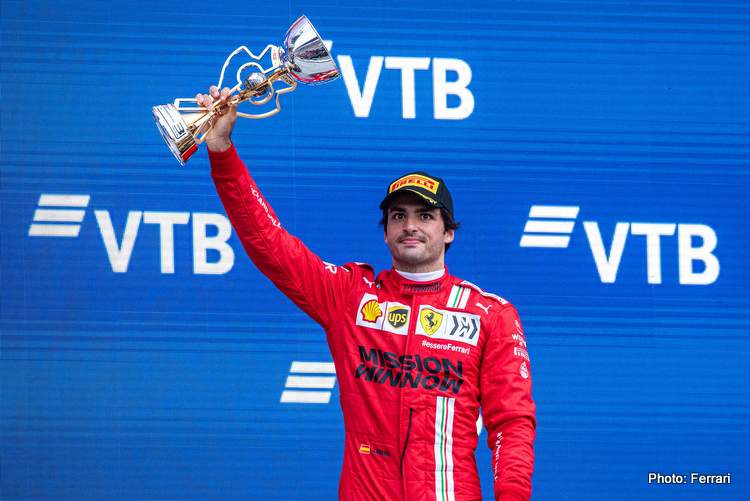 Carlos Sainz followed his strong qualifying performance for the 2021 Russian Grand Prix with a solid race performance where he was able to secure third place against adverse circumstances.

Sainz made a great start overtaking pole sitter Lando Norris, and lead the race for a dozen laps before being overtaken again. He was relegated into traffic with his first planned pitstop, and was informed by the team that fifth would be his best achievable result.

The Spaniard though showed his mettle under pressure, and kept his foot down. His attitude was soon rewarded, with rain hitting the track, and Sainz – showing his awareness of the surrounding conditions – radioing his team to stand by for intermediates.

And he was right, intermediates were the tyres of choice, and with the switch done in perfect timing, Sainz found himself back in contention for a podium position, which he duly secured finishing third.

That makes it four podiums for the Scuderia this season, three of which courtesy of Sainz who reflected on his great result in Russia: “This was a tricky but positive weekend for me, with a good quali and a strong race where I gave absolutely everything.

“We made a perfect start from the dirty side, braking late into turn 2 and risking it on the outside of Lando to get into the lead. Unfortunately we suffered from graining and couldn’t hold P1 for much longer and had to pit early.

“After the first stop, we had a very good stint, managing the Hard tyre in traffic and then pushing in clean air, on course for a reasonably comfortable P3 before the rain came and made everything a lot trickier.

“With the used Hard it was clear to me we needed to box for Inters and together with the team we made the right decision at the right moment, regaining P3!” said an elated Sainz.

“It’s a happy podium but I think as a team we need to keep analysing what we can do better to make sure next time a Ferrari is leading we are less vulnerable. We’ve got some time before the next race so we will keep pushing,” concluded Sainz.

Charles Leclerc had a disappointing race after starting 19th for taking the upgraded Ferrari power unit. He made good progress through the field in the first part of the race, but got caught out in the melee at the end, spinning in wet conditions. He ended his race out of the points in 15th.

“What a disappointing end to an otherwise extremely positive race!” said Leclerc.

“I had a good start, gaining a few positions. Everything looked really promising, I made lots of overtakes and my pace was strong,” he continued.

“Things suddenly changed when it started to rain at the very end of the race. Carlos was ahead and decided to pit for Inters, while I still had some doubts. I tried to do another lap on slicks, hoping that the rain would decrease. But it started pouring down and it was just impossible to go on without pitting with two laps to go. That was basically the end of my race, which is a real shame.

“A good job from the team and Carlos to bring home a third place today,” said Leclerc acknowledging his team and teammate’s achievement on the day.

Ferrari still trail McLaren by 17.5 points in the constructors’ standings with seven races to go.