Norris: It was my decision. I’m unhappy, devastated 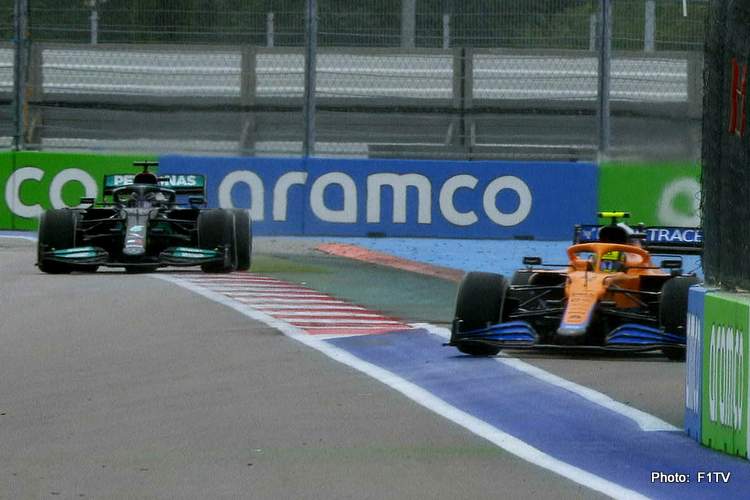 Lando Norris dominated the 2021 Russian Grand Prix until the rain came down and he opted to stay out on slicks, it proved a bad call as he lost the lead of the race, spun and ended a disappointing seventh.

Credit to the McLaren driver for putting his hand up and admitting it was his call that denied him his first victory after an enthralling race. Until the rain bucketed down, with half a dozen laps remaining, he had not put a foot wrong.

From his first pole position start, Norris got a good start but after the lights went out he lost the drag race into Turn 1 to the Ferrari of Carlos Sainz. The orange car tucked behind the red one, stalking him until lap 13 when he punched to take the lead.

Thereafter he was in charge. Even after the pitstops, he led, with eventual race winner Lewis Hamilton large in his mirrors., but the 21-year-old kept his cool and responded to all attacks from the 36-year-old seven-time F1 world champion.

But then came the rain down and the story changed dramatically as Norris explained: “I don’t know where to start. I’m unhappy, devastated in a way. We made a call to stay out and we stand by that. It was the wrong one at the end of the day but I made the decision just as much as the team. It was more that they thought I should box and I decided to stay out.

“It was my decision, I thought it was the way to go.

“I felt like I did everything I could, even when it got a bit tricky at the end. I made a couple of mistakes but still kept Lewis behind and managed to pull away a little bit. A bit of luck like the laps I was out before Lewis boxed was perfectly fine for the tyres I was on and I got told the rain was going to stay the same amount.

“Had it stayed the same amount we had the right decision, but it obviously got a lot wetter than we as a team expected. When it’s only two laps to go, when there are 20 to go you’re maybe not as aggressive with decisions.

“We did what we thought was right, which I’m happy with. It was wrong at the end of the day but everything until then the guys did an excellent job. I’m happy with everything apart from that one decision which we’ll review and try not to make again,” added Norris.

Whatever the case, Norris continues to astound with his performances, entrenching himself as a definite star for the future with a win merely a question of time.

Hamilton – on the occasion of his incredible 100th F1 victory – was generous in his praise of Norris: “Lando did such an amazing job, he had such incredible pace. He’s doing such a great job for McLaren – this was bittersweet. It’s nice to see my old team ahead.”

Lando must have been gutted but he still found time to congratulate Lewis 👍#RussianGP #F1 pic.twitter.com/li8IJwsiP8