Perez: We could have tried slick tyres one lap earlier 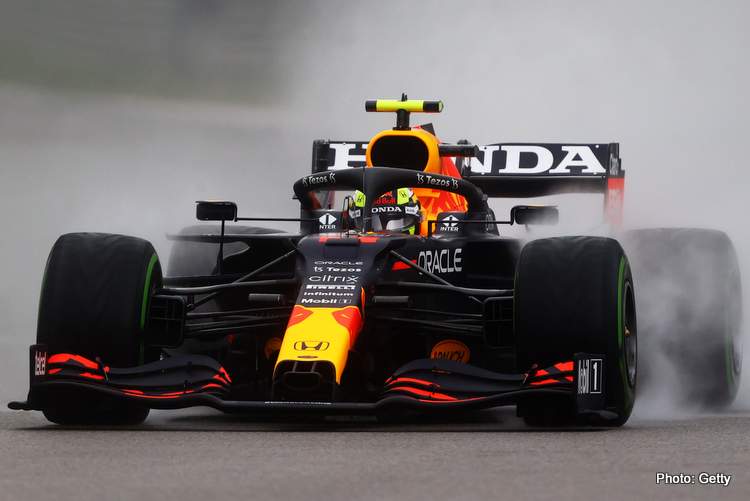 Sergio Perez is expected to fly the flag for Red Bull this weekend at the Russian Grand Prix, with teammate Max Verstappen starting from the back of the grid; the ball is very much in the Mexican’s court.

As it was in qualifying on Saturday, Perez fumbled the ball by ending the session at Sochi Sochi ninth. A disappointing result for the veteran who Red Bull signed for this year to back up their ace Max Verstappen and bring in big results for the team.

Qualifying started well for the Mexican, ending Q1 third fastest with the Mercedes duo ahead by four-tenths. But it got worse in Q2, where he was seven-tenths shy of the top time, only good for fifth, and worse again in Q3 when he was 3.3s off the pace.

Perez had not managed to maximise the use of the slick tyre when it mattered, not helped by a mistake on his warm-up lap before his final shot on slicks.

In the team report, Perez said: “Things were looking really promising and we had a strong Q1 and Q2. But in the changing weather and track conditions, timing is important and in hindsight, we probably could have tried slick tyres one lap earlier.

“As we know anything can happen in the race and a positive to take from today is that the car was performing very well in the wet. We are going to move positively into Sunday and the main target will be to get a strong start and then put together the best possible race,” added Perez.

On the other side of the garage, Verstappen did not venture out, as any result would have been nullified by the two penalties he is serving which means starting at the back of the grid no matter what.

The Dutch ace explained: “We decided not to do too many laps in qualifying as the risk of having a moment or an accident would not be worth it, especially as I’m starting from the back of the grid tomorrow.

“The track conditions were fine and there was good grip, I think it will be similar conditions during the race. The Team did a great job and I’m confident that we made a good decision about how we set up the car.

“Looking ahead to tomorrow, it’s always tricky as naturally the midfield will be a bit closer but it will be important to go out there and score as many points as possible, we’ll do our very best. Hopefully, we can have a fun race!” added Verstappen who leads the 2021 F1 drivers’ standings by five points over Lewis Hamilton.

Red Bull team principal Christian Horner summed up: “Obviously we knew Max was going to be starting from the back of the grid and with today’s tricky qualifying conditions, the reward wasn’t worth the risk. So it was just about making sure everything was ready for him tomorrow.

“Checo will be disappointed to be starting from 9th position, a small mistake on his warmup lap on the slicks in Q3 meant he struggled to generate heat in the tyres and unfortunately missed out on being further up the field.

“The grid isn’t one anyone would have predicted coming into this weekend, and with dry weather forecast for tomorrow on a track where you can overtake, we could see even more overtaking and a very interesting race,” added Horner.

Red Bull trail Mercedes by 18 points ahead of tomorrow’s 15th Round of the championship.