Norris: I risked quite a bit but it paid off 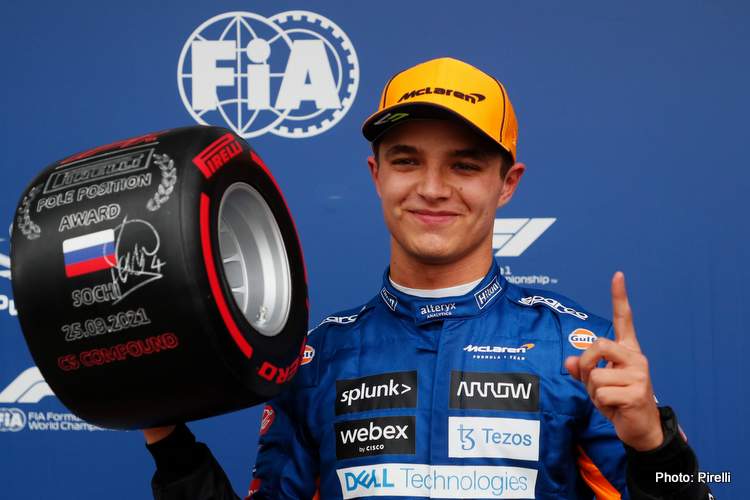 Lando Norris claimed his first pole position in trying conditions; impeccable timing by McLaren to switch him to dry tyres proved inspirational but in the end, the youngster had to deliver the pole-winning lap, which he did.

It was McLaren’s first pole position since Lewis Hamilton grabbed pole for the 2012 Brazilian Grand Prix, 172 races ago! It will be the team’s 156th top-spot start.

While it was a genuine surprise to see Norris pop to the top of the timing screens in the dying moment of Q1, watching him earlier in the session fully in sync with his car, controlled slides, and the like showed a driver at the top of his form and in harmony with his car.

If there were any slides, they were induced by the driver while for many of his rivals they were passengers.

One could argue Norris won the latter, but in the end it took a mighty effort to make it a reality, needless to say the Englishman was delighted: “It feels amazing! Manic session. We made the decision to go slicks, you never think you will get pole until you get it. Extremely happy, big thanks to the team. They have done an amazing job.

“It was tough. I am going to make myself sound good but it was tricky. The lap before I was two seconds down and I was not confident we would improve. I kept the tyres warm, I risked quite a bit but it paid off. We are in the best position we can be in. I am happy, it is my first pole position and hopefully the first of many.”

He later added in the McLaren team report: “Obviously I’m very happy – probably the happiest I’ve been in F1! My first pole position in Formula 1 and in some pretty tricky conditions.

“It was very tough out there, a lot of risks taken, a lot of times I thought I could’ve ended up in the wall – but it all paid-off and was worth it.

“Thanks to the whole team for giving me a great car today. It’s an amazing feeling to get pole and something I’ve always dreamed of since I was a kid. So now I can finally tick that off, and hopefully tomorrow we can just go for another strong result.”

First pole position. Feels incredible. Dreamt of this since I was a little kid. I’m a happy guy 😁 pic.twitter.com/kaB2Of63CM

With their fine one-two at Monza two weeks ago, when Daniel Ricciardo powered to a famous victory, Norris obediently settled for second. But on Sunday in Sochi expect the 21-year-old to make the most of his 53rd Grand Prix start and push for his first victory in the top flight.

Today Ricciardo could not match his younger teammate, the Australian unable to make the most of the drying conditions but was nevertheless good enough for fifth with his effort.

He said: “I’m glad we got to get the session done – who would’ve thought we’d finish on slicks when there was a chance of not even doing qualifying today!

“So, it was fun. It was actually really fun! We enjoyed it. Congrats to Lando on his first pole, and to the team – to keep the momentum of Monza is really cool. So, everyone is really upbeat. From a position point of view, I’m okay with fifth. I think it obviously puts us in good shape for tomorrow.

“Those conditions today were so hit and miss, you could gain or lose time so easily. There were certainly a few corners that bit me, but it’s all good. We learn from it. I’m pretty pleased. Congrats to the whole team – it was exciting, it was fun and now let’s keep the train going!”

“Congratulations to everybody at the track, back at the factory and our colleagues at Mercedes HPP, because that was an exceptionally challenging qualifying session, executed very well.

“All through the sessions, it was important to have the right tyres on the car, and the car in the right position on track. We judged that perfectly today and had two drivers who pulled it off when it mattered.

“We’re dedicating pole position to Mansour Ojjeh – today would have been his birthday – and looking forward to what should be another exciting Formula 1 race tomorrow. We have a competitive car and are in a great position to score good points,” added Seidl.

Ahead of Sunday’s Roun 15 in Russia, Norris lies fourth in the 2021 F1 drivers’ standings with Ricciardo eighth, while McLaren lie third in the F1 constructors’ race, 13.5 points ahead of Ferrari.