Russell: If there’s an opportunity there I’ll go for it 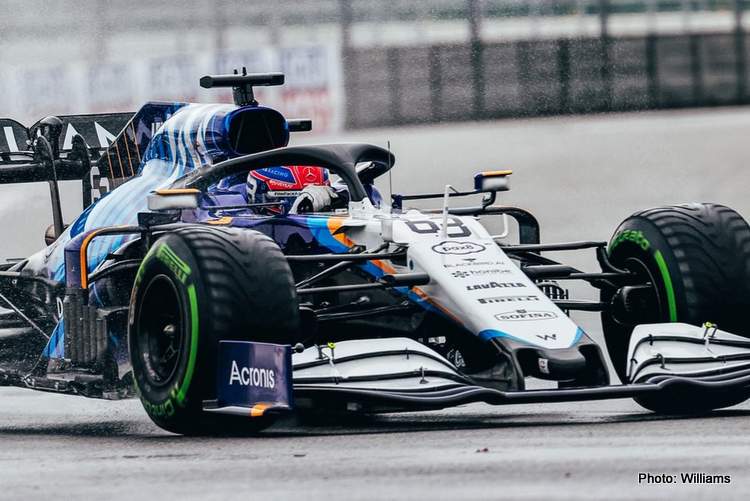 George Russell again put his Williams where it had no place being, qualifying third in the rain-affected qualifying session for the 2021 Russian Grand Prix.

The Mercedes backed 23-year-old will start Sunday’s race directly ahead of his future teammate and title contender Lewis Hamilton.

Just like at Spa-Francorchamps, where Russell qualified second, with wet conditions reducing the gap between the haves and the have-nots, it was again a masterful performance by him during qualifying at Sochi Autodrom.

Like in Belgium last month, Russell kept the best for last. In Q1, he was slower than teammate Nicholas Latifi, but by Q2 he was back ahead in 9th, only just making it into Q3 where drying conditions aided his cause but he still had to do the business when it mattered, and he did!

Russell said afterwards in parc ferme: third: “It is crazy. Second time in the top three in three or four events, the team have done an amazing job. It was tricky out there, there was just one dry line and were you one centimetre off you’d have been on the wet stuff.

He later added in the team report: “P3 is an incredible result and the team did an amazing job once again. We’re riding a wave at the moment and it feels pretty great!

“It’s high risk and high reward in situations like these but I knew it would be slicks for the end of the session. I managed to get the tyres in a good window and was building up to the limit to give it everything I had on the last lap.

“Many people have said in the past that third is the best place to start in Sochi. I won’t be doing anything crazy but if there’s an opportunity there tomorrow I’ll go for it. It’s going to be a very tricky race but I’ll be defending hard and picking my battles.

“We’ve got to look forward but also be realistic as we’ve got some very fast cars behind us. It’s not going to a be easy but I will be doing my best,” added Russell.

Teammate Nicholas Latifi also had a solid afternoon but will start from the back of the grid due to the PU-change penalty: “The pace felt very strong today. You never know how well you’ll be able to switch on the tyres in the wet weather, but when I first hit the brakes I could tell the grip was there and it felt good, which clearly wasn’t the case for everyone.

Even on a track that was constantly improving, the lap I set in the middle of Q1 was enough to get me through to Q2. Seeing what was possible in Q1 makes it more frustrating to be starting from the back of the grid due to the Power Unit change, but that’s racing sometimes. I’ll be pushing hard tomorrow to make up as many positions as I can in the race.”

Williams Head of Vehicle Performance, Dave Robson reported: “George had a slightly more precarious transit to Q2 but once there he did an excellent job to make the most of the situation. The car was working well, and he bided his time and was cool throughout.

“Although we were confident that slicks were the right tyre for the closing stages of Q3, he was instrumental in supporting the decision and recognising that it was the last lap that would be the key lap. As in Spa, we were happy to put everything into one final lap in the best conditions and again it paid off.

“The race will be tough in the dry as we have many quicker cars starting behind. However, the car was working quite well at high fuel on Friday and we have a good opportunity to fight with the McLaren and Ferrari; holding on to a top-three place will be very difficult, but we are going to give it a damn good go,” explained Robson.