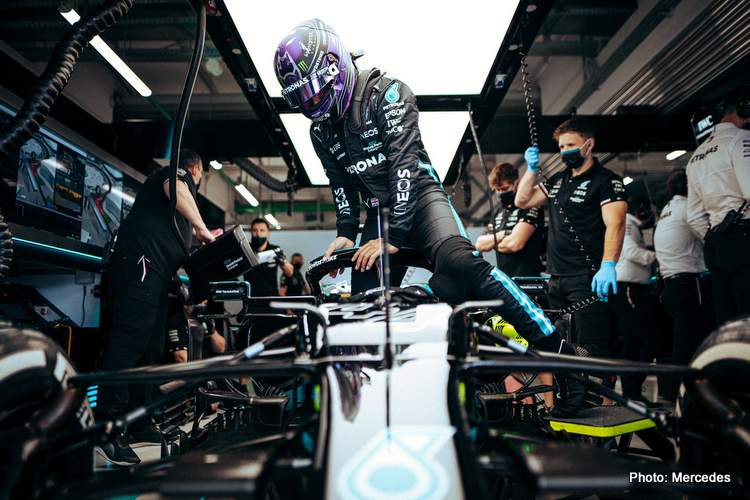 The Russian Grand Prix at Sochi Autdorom has always been a Mercedes stronghold, and on Friday it was too, which augurs well for Lewis Hamilton’s title chances as his rival Max Verstappen will start Sunday’s race from the back of the grid.

Thus, expect Mercedes to try to inflict maximum damage with Valtteri Bottas a willing accomplice to aid teammate Hamilton and his bid for an eighth title. If ever there was an opportunity to impose more pain on Red Bull, this is it.

Speaking after FP2, and having run second to his teammate in both practice sessions on Friday, Hamilton said: “We had two good sessions today pace-wise. We ticked off as much as we could working through different setup items and had very clean runs with no issues so overall it was a good day.

“Valtteri and I went quite different with our setups to see which areas work best and we’ll spend tonight studying the data to understand where we want the car for tomorrow and Sunday.

“It looks like it will be a lot of rain tomorrow, a big wet day, and we’ll have to consider our setup with that in mind but keeping an eye on Sunday which is set to be dry,” added Hamilton, who ended FP2 a mere 0.044s shy of Bottas.

If Hamilton does win it on Sunday it will be his 100th Grand Prix victory, nine more than Michael Schumacher who held the record until the Briton usurped him when he won the 2020 Portuguese Grand Prix.

The 2021 F1 world championship points permutations are intriguing too; if Hamilton wins on Sunday he will be on 246.5, tied with Verstappen should the Dutchman finish second – only the fastest lap point would split the pair if either nabbed it – but anything less for the Red Bull driver would mean the Mercedes man will lead the standings. (Additional reporting by Agnes Carlier)

Bump.🤭 The good news is that he’s OK. 💪pic.twitter.com/2FfaBYcIEw