Sainz: Still a lot of work to do on the long run side 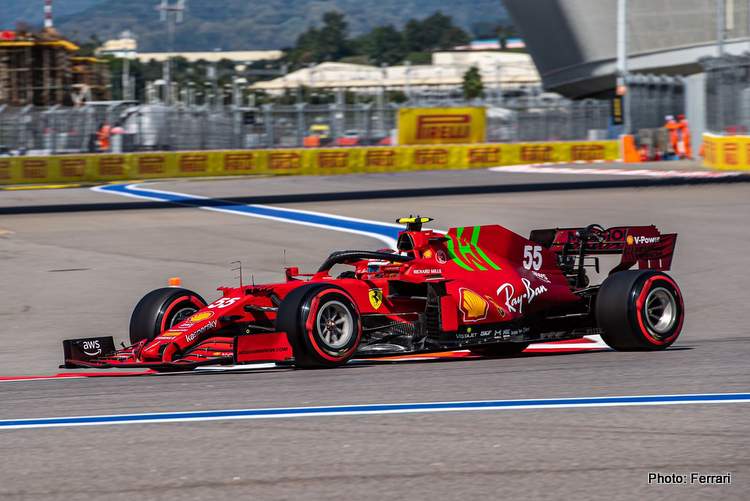 Ferrari were always going to struggle at Sochi Autodrom, its power demanding nature means their drivers Charles Leclerc and Carlos Sainz are ill-equipped to do battle and know they have work to do to find race pace for the Russian Grand Prix.

Day one in Russia does not provide good reading for Tifosi, although Leclerc was good for fourth in FP1, it was a different story in FP2 as he struggled to find the sweet spot, spun during the session to end 10th, 1.3s down on Valtteri Bottas’ top time in the session.

Sainz was a little better in the sister car, finishing seventh but lacking over a second on the benchmark lap time: “There’s still a lot of work to do on the long run side as it looks like there’s some graining on the front tyres. Hopefully, we can find a way to work around it for tomorrow, although we are expecting rain and things can change quickly. We’ll see.”

Despite the big gap to the pace-setters, the Spaniard saw the bright side: “A positive Friday for us in general, mainly coming from a decent balance right from the beginning and the car performing a bit better on this kind of track.”

The team reported that Sainz’s programme was in line with that of the other drivers in the field. He began the first session on Hard Pirelli tyres, before switching to Softs in the second part of the session.

With grid penalties looming for the race, Leclerc was tasked to gain experience with the new hybrid system. He only used the Soft tyres in the first session, covering 22 laps.

In the afternoon he did 24 laps trying all three Pirelli compounds, starting with the Soft, before moving on to the Hard and Medium, so as to evaluate them under similar track conditions.

Leclerc summed up: “We ran different programmes across our two cars today and my focus was on race simulation rather than on qualifying pace as I will start from the back of the grid on Sunday.

“The track evolution was quite significant over the course of the day. It started out being very slippery this morning and then improved with every run. Graining was not an issue, which was positive. In terms of driving experience, I enjoyed the last sector the most.”

Ferrari and Mclaren are entrenched in a battle for third in the championship, meaning best of the rest and the extra prize money, with the Reds fourth in the standings, 13.5 down on McLaren ahead of Round 15 on Sunday in Sochi. (Additional reporting by Agnes Carlier)