Bottas: I really find my flow on this track and enjoy it 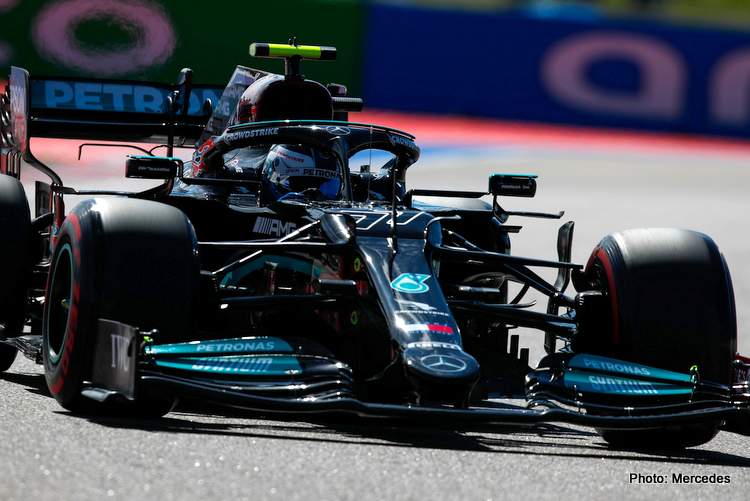 Valtteri Bottas is a new man since Mercedes announced he would be ditched for George Russell, which has triggered a step-up in his game, proof of the fact being that he was untouchable during the first practice day of the Russian Grand Prix weekend.

The Finn, who heads to Alfa Romeo next year, was on inspired form at Monza and kept the momentum going in Sochi today, topping FP1 and FP2, bettering teammate Lewis Hamilton on the day.

Thanks to Bottas, despite Hamilton trailing Red Bull’s Max Verstappen in the 2021 F1 championship standings, Mercedes are 18 points ahead in the F1 constructors’ race at this point in the season.

On Friday, his counterpart, and fellow wingman, Sergio Perez was 11th in the Red Bull; both drivers are open to helping their respective teammates in the quest for the title and, of course, will determine where the F1 constructors’ trophy goes at the end of the season.

For now, Bottas is delivering for Mercedes far more effectively than Perez is for Red Bull, that’s why they lead the 2021 F1 constructors’ race by 18 points.

Speaking after his solid Friday, Valtteri said: “If you look at the timings and based on my own feeling in the car, it was a good day. From the first run, I had confidence in the car and the balance was very good so I could focus on my driving, looking for small gains.

“Tomorrow looks like it will be wet, so it’ll be a completely different experience. The main thing is the car feels good on the long runs so that’s encouraging for Sunday which should be dry. I really find my flow on this track and I enjoy it – when the car works well here, it’s great fun to drive.”

Ahead of Round 15 on Sunday, Bottas lies third in the championship standings on 142 points 85.5 points behind Verstappen and 80.5 behind Hamilton; he might factor into contention if the two leaders crash into each other as they did at Monza and Silverstone.

But the reality is, Bottas will have to play second fiddle to his teammate, accept team orders if they arise and “take one for the team” as he said ahead of the weekend in Russia, but don’t write off the man who won here last year and also in 2017, in only his fourth race for Mercedes – also his first F1 victory. (Additional reporting by Agnes Carlier)